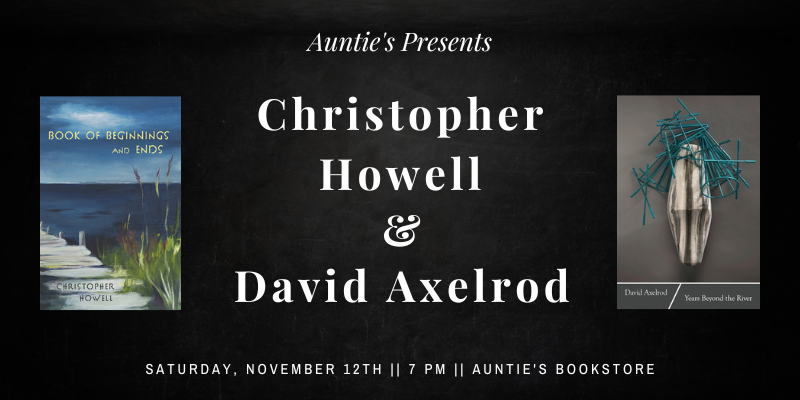 Join us for an evening of poetry with Christopher Howell & David Axelrod celebrating their most recent poetry collections!

RSVP for this free event below

Book of Beginnings and Ends focuses on the continuing dance between initial and terminal experiences, effects, and conditions. The poems in the book's four sections come in a wide variety of tones and emotional postures, from hilarity to deep grief, in their quest for balance, some means of containing and celebrating both extremes. The the poems propose, in fact, that, along with a persistent kindness, achieving and celebrating such balance is life's essential work. This new volume takes on its subject matter with the  lyric imagination, tenderness, clarity and force readers of Howell's writing have come to expect.

Born in Portland, Oregon, Christopher Howell attended Pacific Lutheran and Oregon State Universities, and, after serving as a military journalist during the Vietnam war, received graduate degrees from Portland State University and the University of Massachusetts. He is author of twelve previous collections of poems including The Grief of a Happy Life, Love's Last Number, Gaze, and Dreamless and Possible: Poems New and Selected. He has received the Washington State Governor's Award, the Washington State Book Award, two fellowships from National Endowment for the Arts, two from the Artists Trust, and a number of other fellowships and awards, including three Pushcart prizes. His poems, essays, and interviews may be found in many journals and in more than forty-five anthologies. Since 1996 he has lived in Spokane, where he is Emeritus Professor on Eastern Washington University's Master of Fine Arts in Creative Writing faculty. He is married to the artist Barbara Ellen Anderson, and they have a son, Evan, who is also a painter.

Years Beyond the River
David Axelrod writes achingly beautiful poems on the growing shadow of climate collapse. His lamentations address our refusal to turn away from the insatiable desire for consumption and material wealth, asking, "Aren't we the fire front, gnawing through dry scrub?" Yet this collection, as it brings us into the intimacy of earth's memory and its survivors reveals the many ways we might learn to praise the abundant sacredness of the greater-than-human world. Like the prophets of old who cried out in the wilderness, Axelrod offers possible visions of healing for "a future world / where a young aspen grove // yields back all of summer's light into air." -Todd Davis, Native Species

David Axelrod is the author of eight previous collections of poetry, most recently The Open Hand, and two collections of nonfiction, The Eclipse I Call Father and Troubled Intimacies. He is the director of the low residency MFA and Wilderness, Ecology, and Community Programs at Eastern Oregon University. He also edits basalt: a journal of fine & literary arts and is a contributing editor for Lynx House Press. He makes his home in Missoula, Montana.

Book of Beginnings and Ends (Paperback)

Book of Beginnings and Ends focuses on the continuing dance between initial and terminal experiences, effects, and conditions. The poems in the book's four sections come in a wide variety of tones and emotional postures, from hilarity to deep grief, in their quest for balance, some means of containing and celebrating both extremes.

Years Beyond the River (Paperback)