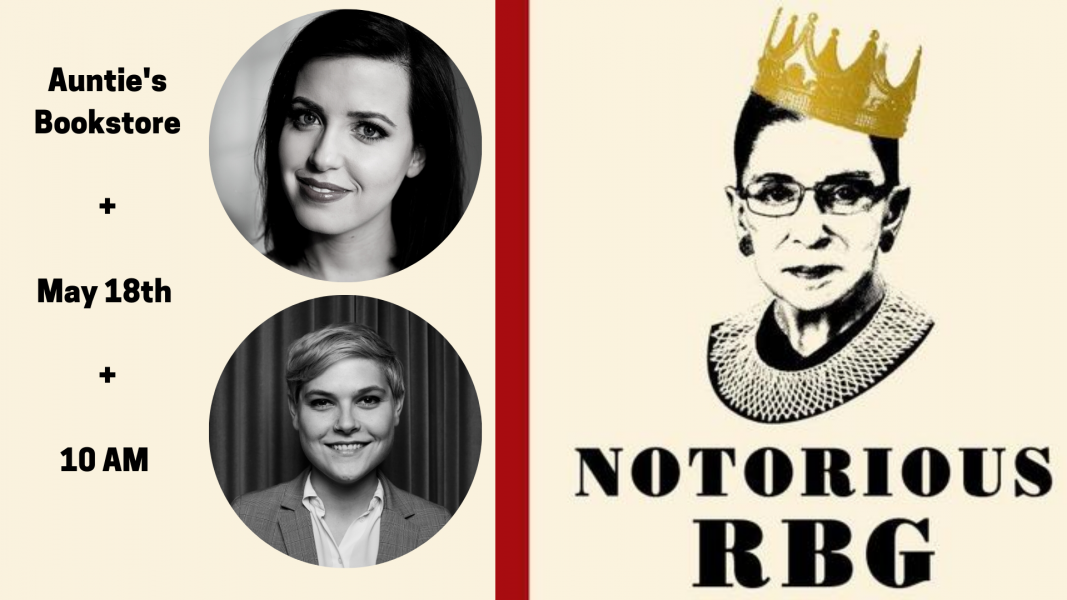 Auntie's and the Women Helping Women fund are delighted to present a morning event with Irin Carmon and Shana Knizhick, authors of the hit book, Notorious RBG!

This event is free and open to the public.

Help us keep you safe! RSVP on our Facebook page and/or below!

She was a fierce dissenter with a serious collar game. A legendary, self-described "flaming feminist litigator" who made the world more equal. And an intergenerational icon affectionately known as the Notorious RBG. As the nation mourns the loss of Ruth Bader Ginsburg, discover the story of a remarkable woman and learn how to carry on her legacy.

This runaway bestseller, brought to you by the attorney founder of the Notorious RBG Tumblr and an award-winning feminist journalist, is more than just a love letter. It draws on intimate access to Ginsburg's family members, close friends, colleagues, and clerks, as well as an interview with the Justice herself. An original hybrid of reported narrative, annotated dissents, rare archival photos and documents, and illustrations, the book tells a never-before-told story of an unusual and transformative woman who transcended divides and changed the world forever.

Shana Knizhnick is a staff attorney at the Legal Aid Society of New York City’s Criminal Defense Practice. Previously, she was a legal fellow at the ACLU of the District of Columbia. While a student at New York University School of Law, she created the Notorious RBG Tumblr, a website dedicated to Justice Ruth Bader Ginsburg.

Irin Camron is a journalist, bestselling author, and a frequent speaker around the country on women’s rights and leadership. A New York magazine senior correspondent, she reports and comments on gender, politics, and the law. Carmon previously served as an on-air contributor to CNN, and a staff reporter at MSNBC and NBC News.

"It was beyond my wildest imagination that I would one day become the 'Notorious RBG." — Ruth Bader Ginsburg, 2019