Mercy and Madness by Beverly Hodgins 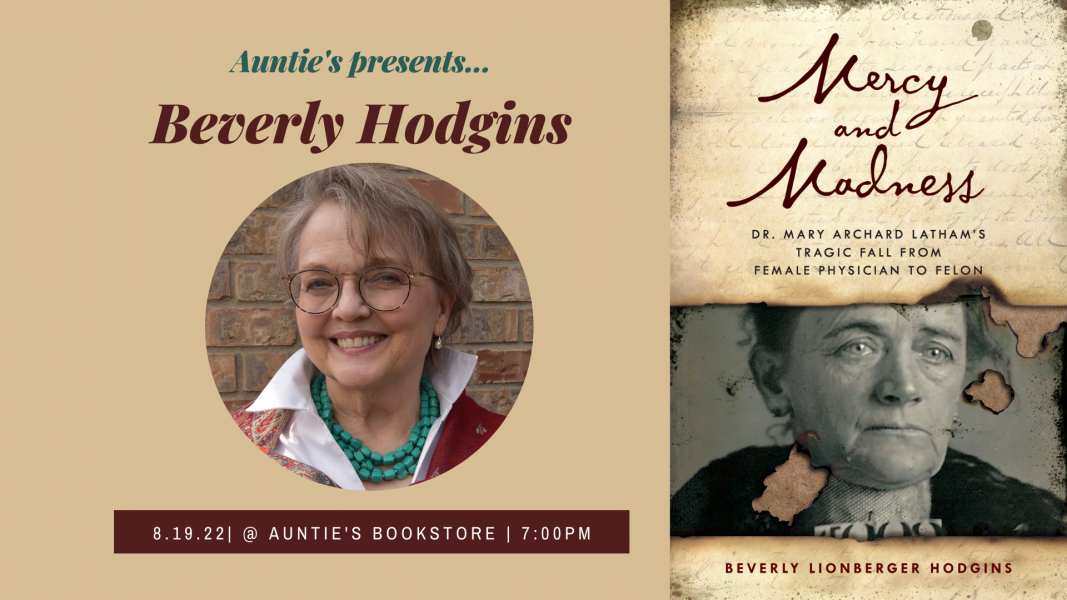 This event is free and open to the public at Auntie's Bookstore.

Spokane, Washington’s first female physician, Mary Archard Latham moved to the community with her three sons—leaving her husband behind in Ohio—in 1888. She sought a better climate for her health and worked tirelessly for the health of all of Spokane’s citizens, but particularly women and children and especially the poor. She helped found the Spokane Humane Society and the Spokane Public Library, and she was beloved and respected in the community.

Then, in 1903, one of her sons died and she seemingly became unhinged. She would be seen wandering the streets, wailing and inconsolable, and her behavior became extremely erratic. In 1905, she was accused, arrested, and convicted of arson, then sentenced to four years of hard labor in the state penitentiary. She escaped into the forests of Idaho, where she hid from a massive manhunt for a week before being captured and sent to prison in Walla Walla. She eventually returned to Spokane a broken yet determined woman and died in 1917. Despite the tragic and violent events that characterized her later years, today Dr. Mary A. Latham is honored in Spokane for the good she did in the first part of her life. Mercy and Madness captures the captivating, outrageous, and sometimes-sorrowful life of Dr. Mary Archard Latham in her own words.

An active member of Women Writing the West (WWW), she served from 2018 through 2020 as editor of the WWW Catalog of Authors’ Books. She is also a member of Western Writers of America and the Society of Children’s Book Writers and Illustrators.

As a member of the fourth generation of an Oregon pioneer family, Beverly has a distinct interest in all things historical regarding the settling and development of the Pacific and Inland Northwest. She is also a distant relative of Dr. Mary Archard Latham.

Spokane, Washington's first female physician, Mary Archard Latham moved to the community with her three sons--leaving her husband behind in Ohio--in 1888. She sought a better climate for her health and worked tirelessly for the health of all of Spokane's citizens, but particularly women and children and especially the poor.