The Garden of Empire by J.T. Greathouse 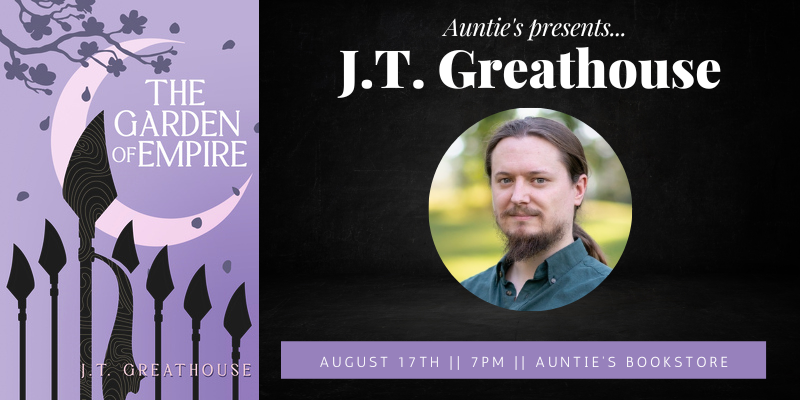 Join us and J.T. Greathouse to celebrate the release of his book The Garden of Empire, the sequel to The Hand of the Sun King.
*Preorder the book now!*

RSVP below for this FREE event

The boy once known as Wen Alder has become the rebel witch Foolish Cur. Schooled in both the powers that bound him to serve the emperor as well as the furious, wild magic of his mother’s ancestors, he was torn between two worlds, until he realized the brutal nature of the emperor and his rule. Joining the rebellion, he soon experienced the painful sacrifices that come with defiance.

Now the emperor—covetous of all the magic he controls—has decided to take his ruthless quest for power to the gods themselves. If he succeeds, the gods will unleash a storm of death and destruction unlike any even imagined. Only Foolish Cur has the skills and strength to stave off such a nightmare.

While Foolish Cur fights the Empire in Nayen, others wage their own rebellions. A successful tutor opens a school to preserve his own dying culture while a warrior of the plains discovers powers long thought lost. And a servant of the empire begins to question the violence that threatens to engulf them all…

On his father’s side, a legacy of proud loyalty and service to the god-like Sienese Emperor spanning generations. And it is expected that Alder, too, will follow this tradition by passing the Imperial exams, learning the accepted ways of magic and, if he serves with honor, enhancing his family's prominence by rising to take a most powerful position in Sien—the Hand of the Emperor.

But from his mother he has inherited defiance from the Empire, a history of wild gods and magic unlike anything the Imperial sorcerers could yet control. It began when his spirited, rebellious grandmother took Alder into the woods and introduced him to her ways—ways he has never been able to forget.

Now, on the verge of taking the steps that will forge the path of his life, Alder discovers that the conflict between the Empire and the resistance is only the beginning of a war that will engulf both heaven and earth, gods and man—and he may be the key to final victory for whichever side can claim him as their own…

J.T. Greathouse is the author of the PACT & PATTERN trilogy, which began with THE HAND OF THE SUN KING and continues with THE GARDEN OF EMPIRE, and was nominated for the British Fantasy Award for Best Newcomer in 2021. He holds a BA in history and philosophy with a minor in Asian studies as well as a Master's in Teaching from Whitworth University, and spent four months of intensive study in Chinese language and culture at Minzu University in Beijing (中山民族大学, Zhongshan Minzu Daxue). His short fiction has appeared, often as Jeremy A. TeGrotenhuis, in Beneath Ceaseless Skies, Writers of the Future 34, Deep Magic, Orson Scott Card's Intergalactic Medicine Show, and elsewhere. In addition to writing, he has worked as an ESL teacher in Taipei, as a bookseller at Auntie's Bookstore in Spokane, and as a high school teacher. He was co-chair of the programming committee for the Flights of Foundry conventions in 2020 and 2021. He currently lives in Spokane, Washington with his wife Hannah, his cat Ofelia, and several overflowing bookshelves.

The Hand of the Sun King (Pact & Pattern) (Paperback)

“An original fantasy filled with magic and culture, the story of a character torn between two names, two loyalties, and two definitions of good and evil.”—Kevin J. Anderson, New York Times bestselling author of Spine of the Dragon