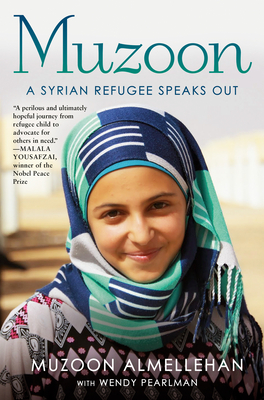 Coming Soon - Available for Pre-Order Now
When her family had to flee Syria, 14-year-old Muzoon was told to pack only the most essential things—and so she packed her schoolbooks.

This is the inspiring true story of a Syrian refugee who fought hard for what she needed—and grew into one of the world's leading advocates for education.

This eye-opening memoir tells the story of a young girl's life in Syria, her family's wrenching decision to leave their home, and the upheaval of life in a refugee camp. Though her life had utterly changed, one thing remained the same. She knew that education was the key to a better future—for herself, and so that she could help her country. She went from tent to tent in the camp, trying to convince other kids, especially girls, to come to school. And her passion and dedication soon had people calling her the "Malala of Syria."
Muzoon has grown into an internationally recognized advocate for refugees, for education, and for the rights of girls and women, and is now a UNICEF goodwill ambassador—the youngest ever, and the first refugee to play that role.
Muzoon's story is absolutely riveting and will inspire young readers to use their own voices and stand up for what they believe in.
MUZOON ALMELLEHAN is an internationally recognized activist for education, refugees, and the rights of girls and women. She is currently the youngest UNICEF ambassador at 21 years old, as well as the first with official refugee status. Last year, she was named one of Glamour magazine's Women of the Year and one of Teen Vogue's 21 Under 21.

Muzoon has spoken in front of the United Nations General Assembly and at the G20 Summit in Germany, among several other distinguished audiences, and presented a TEDxTeen Talk called "The Future of Syria Depends on One Thing." Angela Merkel, Bill Clinton, and Malala Yousafzai are among the supporters of Muzoon and her important work.

Muzoon now lives in Newcastle, England, with her family, where she is attending university.

WENDY PEARLMAN is a professor of political science at Northwestern University. Wendy’s book We Crossed a Bridge and It Trembled: Voices from Syria (Custom House, 2017) is based on interviews that she has conducted, from 2012 to the present, with more than 300 displaced Syrians in Jordan, Turkey, Lebanon, the United Arab Emirates, Denmark, Sweden, Germany, and the United States. The book is a collection of firsthand testimonials that chronicle the Syrian rebellion, war, and refugee crisis exclusively through the stories and reflections of people who have lived it.