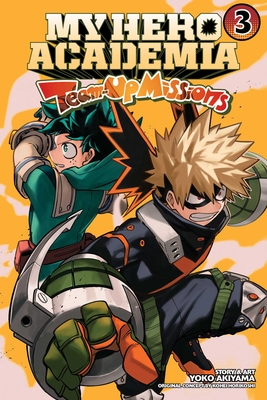 This is book number 3 in the My Hero Academia: Team-Up Missions series.

The aspiring heroes of My Hero Academia team up with pro heroes for action-packed missions!

The ambitious Team-Up Missions Program pairs groups of aspiring heroes with pro heroes to go on action-packed missions! Although Izuku Midoriya and his U.A. High friends are thrilled to participate, there’s just one catch—there’s no telling who will be teamed up with whom! From top heroes to students from other classes and schools, anyone could be on the same team.

My Hero Academia goes to the dogs when Mineta’s attempt to impersonate a cute pooch attracts dastardly dognappers! Will the series’ dog have his day? Then, Midoriya and Bakugo give tree hugging a try, class A goes shopping for a new classmate, and our aspiring heroes visit a zoo to pick up some wild tips from the animal world’s heroes.

Includes an epilogue story to the My Hero Academia: World Heroes’ Mission film!
Kohei Horikoshi was born in Aichi, Japan, in 1986. He received a Tezuka Award Honorable Mention in 2006, and after publishing several short stories in Akamaru Jump, his first serialized work in Weekly Shonen Jump was Oumagadoki Zoo in 2010. My Hero Academia is his third series in Weekly Shonen Jump.