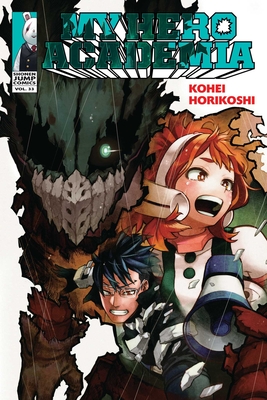 This is book number 33 in the My Hero Academia series.

Knowing that All For One has put a target on his back, Midoriya has left U.A., hoping to draw the villains away from everyone he cares about. But his friends know the newest bearer of One For All shouldn’t handle this burden alone, so they set out to bring him back. The forces of good need every hero they can find as the unfolding crisis in Japan now has global ramifications, with even foreign heroes itching to join the fight…
Kohei Horikoshi was born in Aichi, Japan, in 1986. He received a Tezuka Award Honorable Mention in 2006, and after publishing several short stories in Akamaru Jump, his first serialized work in Weekly Shonen Jump was Oumagadoki Zoo in 2010. My Hero Academia is his third series in Weekly Shonen Jump.