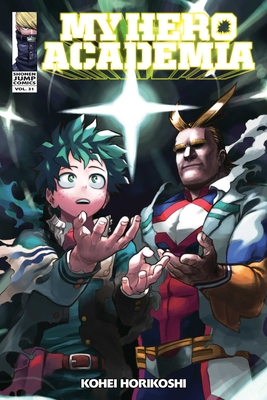 This is book number 31 in the My Hero Academia series.

In the aftermath of the battle in Jaku City, the forces of good are reeling. With so many heroes dead, it seems like society itself is on the verge of collapse. Although Midoriya and the others have managed to drive off Tomura, All For One is only just getting started. As the dust settles, the Todoroki family must finally face their troubled past, and Midoriya begins to understand what One For All really is and that reaching his full potential might test his convictions…
Kohei Horikoshi was born in Aichi, Japan, in 1986. He received a Tezuka Award Honorable Mention in 2006, and following the publication of several short stories in Akamaru Jump, his first serialized work in Weekly Shonen Jump was Oumagadoki Zoo in 2010. My Hero Academia is his third series in Weekly Shonen Jump.