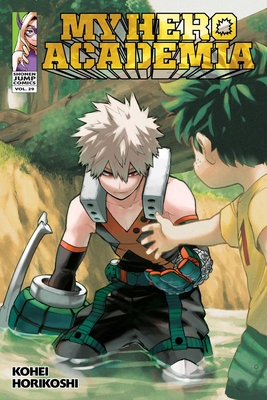 This is book number 29 in the My Hero Academia series.

Tomura Shigaraki has finally awakened, and as he begins to unleash his savage powers, the heroes realize it’s going to take everyone and everything they have to stop him. Several heroes have been lost already, and even as the number one hero, Endeavor, takes on Tomura, Midoriya and Bakugo must put themselves on the line. Meanwhile, the massive villain Gigantomachia rampages toward Jaku City, and it seems nothing can stop him—but the students of U.A. are determined to succeed or die trying…
Kohei Horikoshi was born in Aichi, Japan, in 1986. He received a Tezuka Award Honorable Mention in 2006, and following the publication of several short stories in Akamaru Jump, his first serialized work in Weekly Shonen Jump was Oumagadoki Zoo in 2010. My Hero Academia is his third series in Weekly Shonen Jump.