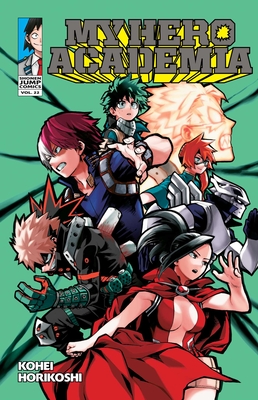 This is book number 22 in the My Hero Academia series.

In the third match of the joint battle training, the students of Class 1-A have their hands full dealing with the unexpected creativity of Class B’s Quirk use. These matches give everyone a chance to reflect on exactly where they all stand in relation to each other, and on the events in their lives that have brought them to this point. Then it’s time for Bakugo to show what he’s learned…
Kohei Horikoshi was born in Aichi, Japan, in 1986. He received a Tezuka Award Honorable Mention in 2006, and after publishing several short stories in Akamaru Jump, his first serialized work in Weekly Shonen Jump was Oumagadoki Zoo in 2010. My Hero Academia is his third series in Weekly Shonen Jump.