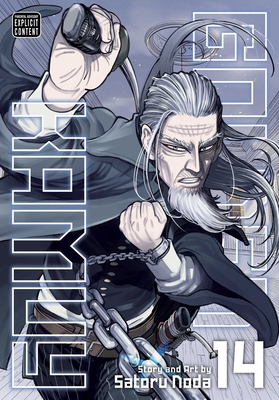 This is book number 14 in the Golden Kamuy series.

Sugimoto and Asirpa finally come face to face with Noppera-bo inside Abashiri prison, but as Asirpa looks into his eyes she realizes he is not her father! In the rush to escape, Anji Toni makes off with Asirpa, leaving Sugimoto and Shiraishi trapped inside, with Hijikata also set to betray them. Making matters worse, they’re all caught between Warden Inudo and his guards, and Lieutenant Tsurumi’s gunboat fleet on the river. With so much serious firepower being deployed, is anyone getting out alive?