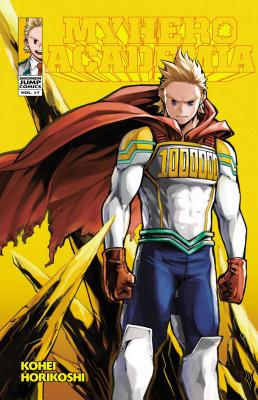 This is book number 17 in the My Hero Academia series.

The raid on the Hassaikai gang is in full swing, and the heroes plunge into the darkness toward their ultimate confrontation. Lemillion engages Overhaul in an attempt to rescue Eri, and the battle reaches a new level of intensity. Midoriya is desperate to help his mentor, but what fate has Nighteye foreseen for them all in this clash? And does the key to Midoriya’s survival lie in Eri herself?
Kohei Horikoshi was born in Aichi, Japan, in 1986. He received a Tezuka Award Honorable Mention in 2006, and following the publication of several short stories in Akamaru Jump, his first serialized work in Weekly Shonen Jump was Oumagadoki Zoo in 2010. My Hero Academia is his third series in Weekly Shonen Jump.