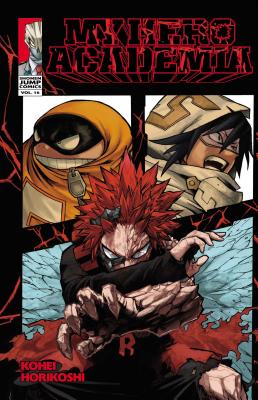 This is book number 16 in the My Hero Academia series.

The Hassaikai crime gang, led by the young boss Chisaki, has been working on a plan to distribute a Quirk-destroying drug. The key to this evil scheme is the young girl Eri, held prisoner in Chisaki’s hideout. Nighteye asks other heroes to form a team to launch a rescue attempt—and the students of Class 1-A are going into the lion’s den with them! But Nighteye, who can see the future, refuses to look at the fates of anyone on the mission…
Kohei Horikoshi was born in Aichi, Japan, in 1986. He received a Tezuka Award Honorable Mention in 2006, and following the publication of several short stories in Akamaru Jump, his first serialized work in Weekly Shonen Jump was Oumagadoki Zoo in 2010. My Hero Academia is his third series in Weekly Shonen Jump.