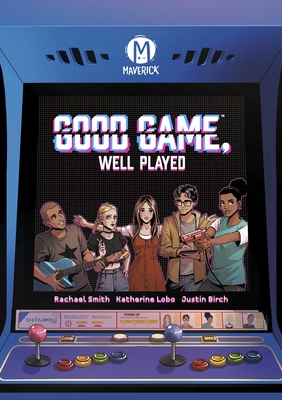 
Not currently on our shelves. Usually Ships in 1-5 Days
It’s 2009, and Sienna is really not looking forward to flying back into her hometown to say goodbye to one of the people she called family.

Though that feels like a lifetime ago. It’s 1999. And Sienna is looking forward to what is shaping up to be the perfect summer in her perfect life. She has a job working in the local video game store, Game Champ, with her four best friends, and that was how it was going to be forever… Until Jason Silver, the money-hungry landlord threatens to shut the store down. The kids must work together to save it, but with Art’s huge crush on Sienna, Jo’s crippling self-doubt, Sid’s obsession with his band, and Hope’s mysterious living situation getting in the way… how likely are they to succeed?

British Comic Award-nominated writer Rachael Smith (The Rabbit) and debut graphic novel artist Katherine Lobo share their tale about looking back at your rose-colored life and finding the family that you thought you lost.
Rachael Smith’s debut graphic novel House Party came out in 2014 with Great Beast Comics to critical acclaim. The Rabbit, released by Avery Hill Publishing in 2015, is her second graphic novel and was nominated for Best Book in the British Comic Awards 2014/15. Rachael is also the creator of Flimsy the Kitten and One Good Thing. She currently works with Titan Comics on her monthly strip for the Doctor Who comic series, and is working on her new webcomic, Bess, which launched November 2015. She lives in Hebden Bridge, in Yorkshire, in the UK.
www.rachaelsmith.org

Katherine Lobo is a comic artist and illustrator from Costa Rica. She's worked for a variety of indie creators and publishers including Mad Cave Studios, Boom! and Comic Experience. More recently, she was the artist for Bullet, currently published in Tapas.

"Smith has created family dynamics that should prove to be relatable to readers, while intertwining them inside a game playing genre that most young people understand. [...] All in all, Good Game, Well Played takes its place among the exceptional work that Maverick continues to put out for the Youth market."
— Geek Vibes Nation

"Good Game, Well Played is a found family fable that wears its hearts on its sleeve, while paying loving tribute to video games and the 90’s. If you love coming-of-age films or manga, or you’re looking for a fresh breath of air when it comes to comics, this is the story for you."
— Collier "CJ" Jennings