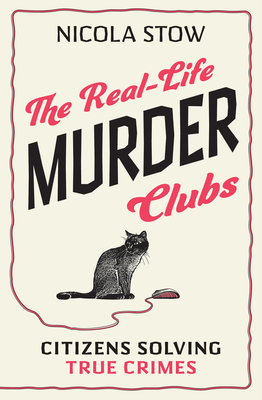 
On Our Shelves Now
The story behind real-life clubs of ordinary citizens who come together to solve true crime mysteries—including the sleuths behind Don't F**k with Cats: Hunting an Internet Killer

In 2019, Netflix had a hit with documentary series Don't F**k with Cats: Hunting an Internet Killer. It was based on one of Canada’s most infamous crimes: the 2012 murder of thirty-three-year-old Lin Jun by his porn-star boyfriend, Luka Magnotta, in Montreal. Magnotta filmed himself killing and (apparently) eating parts of his victim; he also mailed Jun’s feet and hands to two Canadian political parties and two elementary schools.

Prior to Jun’s murder, though, Magnotta had anonymously posted online videos of himself killing kittens. Horrified Facebook sleuths worked tirelessly to uncover the kitten-killer’s identity and location. Armchair detective Deanne Thompson, a data analyst for a Vegas casino by day, spent countless hours researching Lithuanian doorknobs, among other things, to help identify items in Magnotta’s videos during her quest to unmask him.

Nicola Stow reveals the fascinating stories behind this and and similar cases in which ordinary citizens, in real-life murder clubs, as in Richard Osman’s bestselling fiction, help to investigate crimes, both recent and cold cases. Includes the cases of Casey Anthony, John Wayne Gacy, JonBenét Ramsey, Golden State Killer, Boston Marathon bombings, and many more.
Nicola Stow is the co-author or ghostwriter of a number of books that have been nominated for awards. Her books include One Chance: Surviving London’s Gangs, Above and Beyond: Secrets of a Private Flight Attendant and Cabin Fever: The Sizzling Secrets of a Virgin Air Hostess.