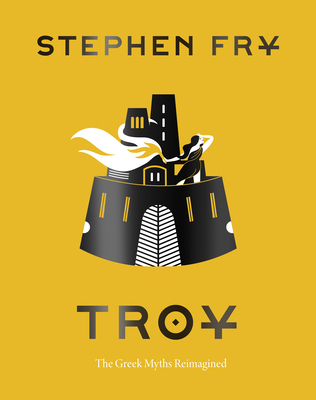 
On Our Shelves Now
In this brilliant conclusion to his bestselling Mythos trilogy, legendary author and actor Stephen Fry retells the tale of the Trojan War with his trademark wit and vibrance.


Full of tragic heroes, intoxicating love stories, and the unstoppable force of fate, there is no conflict more iconic than the Trojan War. Troy is the story of the epic battle retold by Fry with drama, humor, and vivid emotion. Achilles, Hector, Odysseus, Helen, their lovers, and their mortal enemies all burn bright in Fry's compelling prose. Illustrated throughout with classical art inspired by the myths, this fresh take on an ancient tale invites you to explore a captivating world with a virtuoso storyteller as your guide.

BELOVED AUTHOR: Stephen Fry is an icon whose signature wit and mellifluous style makes this retelling utterly unique. Fans will love hearing his interpretation, whether they are familiar with the original Greek myths or not.

STUNNING SERIES CONCLUSION: Mythos and Heroes, the first two installments in the Greek mythology trilogy, were international bestsellers. Now fans can complete their set and read the thrilling third book.

GORGEOUS GIFT: With a vibrant contemporary design, full-color artwork throughout, and shimmering metallic highlights on the jacket, this book makes a superb present.

READERS LOVE IT:  Stephen Fry's Greek Myths series' nearly 5-star rating and rave reviews make each of the three volumes a winner. “Stephen Fry is our modern-day Homer,” one reviewer declares, while another observes that “you really feel as if you're there as the events take place.” Buzzfeed says, “It's a quick-witted retelling so beginners and experts can both get something from it.”


Perfect for:
Stephen Fry is an award-winning comedian, actor, presenter, and director. He rose to fame alongside Hugh Laurie in A Bit of Fry and Laurie (which he cowrote with Laurie) and Jeeves and Wooster and was unforgettable as General Melchett in Blackadder. He hosted over 180 episodes of QI and has narrated all seven of the Harry Potter novels for the audiobook recordings. He is the bestselling author of four novels—Revenge, Making History, The Hippopotamus, and The Liar—as well as three volumes of autobiography—Moab is my Washpot, The Fry Chronicles, and More Fool Me.

"There’s nothing dry about Mr. Fry’s exuberant stories. They’re droll, witty and full of pathos. The books are handsome too, illustrated in full color with photos of classical art and works by old masters."

A "Favorite Books of the Summer" Pick