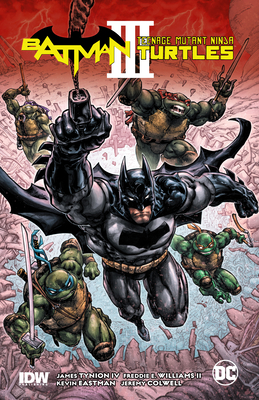 Not currently on our shelves. Usually Ships in 1-5 Days
The Batman/TMNT trilogy concludes the coming of Krang!

They have fought the Foot CLain in Gotham City. They've battled Bane in New York. But Batman, Leonardo, Donatello, Michelangelo, and Raphael—the Dark Knight and the Teenage Mutant Ninja Turtles—have never faced a foe like this.

The malevolent alien intelligence called Krang has seized one of the DC Universe's most dangerous technologies. It's all part of his mad plan to create a combined Multiverse, a fusion of the worlds Batman and the Turtles call home.

Now everything these heroes though they knew has changed. Their worlds have collided. Their origin stories have warped. Their new archenemy calls himself the Laughing Man, and his Smile Clan has seized control of New Gotham City.

Can the Caped Crusader and the Heroes in a Half Shell defeat the Laughing Man, unmake Krang's new Multiverse, and resotre their worlds? Or will Krang decide that if he can't control the Multiverse, he will destroy it once and for all?