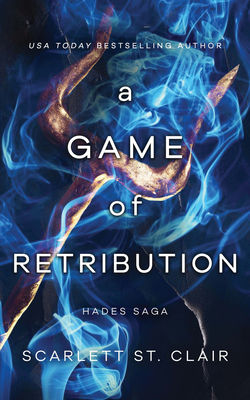 This is book number 2 in the Hades Saga series.

Become enchanted by the fantasy world of gods and mortals in bestselling author Scarlett St. Clair's reimagined New Greece. Readers are "hopelessly addicted" to the story of Hades and Persephone.

Hades, God of the Dead, does not take sides or bend the rules. He makes no exceptions to these values—not for god or mortal, even his lover, Persephone, Goddess of Spring.

But not this time.

When Hera, Goddess of Women, approaches Hades with a plan to overthrow Zeus, he declines to offer help. As punishment, Hera sentences Hades to perform a series of labors. Between killing mythical monsters and recovering deadly stolen artifacts, each feat seems more impossible than the last and draws his attention away from Persephone—whose own tragedy has left her questioning whether she can be Queen of the Underworld.

Can Hades maintain the balance he craves?

Scarlett St. Clair is the bestselling author of the HADES X PERSEPHONE SAGA, the HADES SAGA, KING OF BATTLE AND BLOOD, and WHEN STARS COME OUT. She has a Master's degree in Library Science and Information Studies and a Bachelors in English Writing. She is obsessed with Greek Mythology, murder mysteries, and the afterlife. You can find pictures of her adorable dog Adelaide on her Instagram at authorscarlettstclair, and updates on her books at www.scarlettstclair.com.

“The myth of Hades and Persephone gets a new spin”

"“Filled with sexy scenes, romantic tension between the main characters, and the king of the underworld . . . what more could you ask for?”
" — PopSugar

"St. Clair masterfully balances humorous banter and heat between the central couple...Series fans and new readers alike will be invested in the godly politics." — Publishers Weekly