Big Cats (A Day in the Life): What Do Lions, Tigers, and Panthers Get up to All Day? (Hardcover) 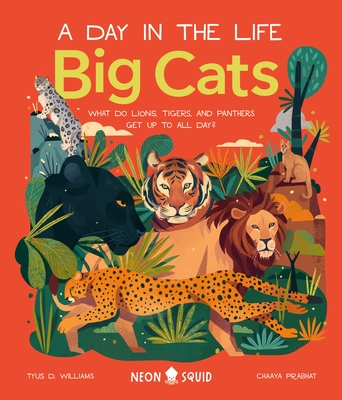 Big Cats (A Day in the Life): What Do Lions, Tigers, and Panthers Get up to All Day? (Hardcover)

Set over a 24-hour period, meet sparring snow leopards, sprinting cheetahs, and slumbering jaguars in this kids’ nonfiction book about the biggest cats on Earth.

Follow the lives of individual big cats as they roar, hunt, fight, and play their way through the day. Wildlife expert Tyus D. Williams cleverly weaves the story from leopard to mountain lion in the style of a nature documentary, including gentle science explanations perfect for future zoologists. Witness incredible moments including:

Beautifully illustrated by Chaaya Prabhat and packed with animal facts, Big Cats (A Day in the Life) is one of the first titles in an exciting new series of animal books from Neon Squid.

Also available: Bugs (A Day in the Life)

Tyus D. Williams is a wildlife ecologist and science communicator with a focus on carnivores, especially big cats. He’s particularly intrigued by the influence predators have on the wildlife and people around them. Born in Southern California, Tyus moved to Georgia and was passionate about wildlife from the age of six. He grew up watching his childhood role models Jeff Corwin and Steve Irwin on TV, and knew he wanted to be a biologist when he got older. Tyus has tracked jaguars in Belize and surveyed salamanders in the Appalachian mountains, and is studying for his PhD at the University of California, Berkeley.

Chaaya Prabhat is a graphic designer, illustrator, and lettering artist. After completing her M.A in Graphic Design from Savannah College of Art and Design, she now works in Chennai, India. She has worked with Snapchat, Facebook, Google, and The Obama Foundation.

Neon Squid creates beautiful nonfiction books for inquisitive kids (and kids at heart). We believe the most amazing stories are real ones, so our books are for children who want to decipher ancient scrolls, orbit distant stars, and dive into the deepest oceans. Our books are a labor of love—written by experts, illustrated by the best artists around, and produced using the finest materials, including sustainably sourced paper. We hope that by reading them kids are encouraged to further explore the world around them.

"Prabhat’s graceful art makes vivid use of color as it depicts cats in moments of intense action. . . A carefully constructed, absolutely engaging primer on fierce cats in the wild." -- Kirkus Reviews, starred review

"Ideal for 5+ fans of Owen Davey’s wildlife books." -- The Guardian

Praise for the A Day in the Life series:

"From action scenes to tidbits of intriguing information to paragraphs of explanation, the text has plenty to offer animal lovers. Varied in layout, these fully illustrated books feature vibrant, stylized artwork with distinctive palettes. An attractive series for kids intrigued by animals in the wild." -- Booklist