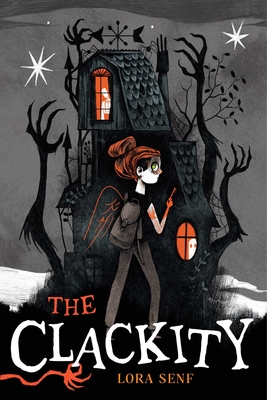 
On Our Shelves Now
Reminiscent of Doll Bones and Small Spaces, this “delightfully eerie” (Erin A. Craig, New York Times bestselling author of House of Salt and Sorrows) middle grade novel tells the story of a girl who must rescue her aunt by entering a world of ghosts, witches, and monsters to play a game with deadly consequences.

Evie Von Rathe lives in Blight Harbor—the seventh-most haunted town in America—with her Aunt Desdemona, the local paranormal expert. Des doesn’t have many rules except one: Stay out of the abandoned slaughterhouse at the edge of town. But when her aunt disappears into the building, Evie goes searching for her.

There she meets The Clackity, a creature who lives in the shadows and seams of the slaughterhouse. The Clackity makes a deal with Evie to help get Des back in exchange for the ghost of John Jeffrey Pope, a serial killer who stalked Blight Harbor a hundred years earlier. Evie reluctantly embarks on a journey into a strange otherworld filled with hungry witches, penny-eyed ghosts, and a memory-thief, all while being pursued by a dead man whose only goal is to add Evie to his collection of lost souls. Will she ever find Des, or is The Clackity planning something far more sinister?
Lora Senf is a writer of dark and twisty stories for all ages. She is the author of The Clackity and The Nighthouse Keeper and credits her love of words to her parents and to the public library that was walking distance from her childhood home. Lora finds inspiration for her writing in her children’s retellings of their dreams, on road trips through Montana, and most recently in an abandoned abattoir. She lives in Washington state with her husband, their twins, and two remarkably lazy cats. Visit her at LoraSenf.com.

“Delightfully eerie, The Clackity is full of chills aplenty and so much heart. I fell in love with Blight Harbor and Evie, even as they gave me goosebumps!”
—Erin A. Craig, New York Times bestselling author of House of Salt and Sorrows

“A wonderfully surreal and sinister journey, perfect for fans of Neil Gaiman’s Coraline.”
—Kurt Kirchmeier, author of The Absence of Sparrows

“The Clackity is a spooky story with a charming main character and a cast full of ghosts, witches, strange houses, and some villains you will not be able to forget. An empowering story about overcoming grief, fear, doubt, and finally learning to trust yourself, wrapped in a chilling tale with some strong Coraline vibes. Senf has crafted what is sure to become a modern classic with Evie’s empowering and triumphant adventure.”
—Ally Malinenko, author of Ghost Girl

“A charming and delightfully spooky tale with just the right balance of chills, mystery, and heart. Evie Von Rathe’s courage to confront her own demons, as well as otherworldly ones, will no doubt inspire young readers as much as it inspired me. This one’s a gem.”
—Gregory Funaro, New York Times bestselling author of Watch Hollow

“If Neil Gaiman, John Bellairs, and Eva Ibbotson had collaborated on a creepy tome for kids, it would have read exactly like The Clackity. I never realized a story could make me feel simultaneously terrified and comforted until I read this book. Like the most unsettling of fairy tales and fables, Senf’s writing is loaded with ideas of grief, love, wisdom, and magic, as well as heaps of heebie-jeebies. The Clackity feels like a brand-new classic of scary kids’ lit. I adored the strong and colorful characters, even the ones who wished to eat the others! This is the kind of adventurous and frightening tale—filled with monstrous imaginings, guaranteed to make your skin crawl—that young folks will want to race through, then flip back to the start and begin again.”
—Dan Poblocki, author of the Shadow House series

"Senf’s worldbuilding is fantastical and compelling, the scares hair-raising. Evie is a capable, vulnerable, brave, and anxious hero; she’s real. She hangs tough, with a magic sparrow companion serving as a sidekick, savior, and coach. While Senf opens the book with a lot of exposition, the story really settles in as Evie begins her quest, and the skilled storytelling will keep readers spellbound and spooked. Cáceres’ eerie black-and-white illustrations enhance the mood and atmosphere. . . . Full of thrills and scares."
— Kirkus Reviews

"Adeptly invoking folkloric elements while creating something darkly original, Senf intimately renders Evie’s trials as both internal and external in an atmospheric adventure that will appeal to readers of Neil Gaiman and middle grade horror."
— Publishers Weekly

"Senf’s atmospheric tale will make the hairs on the back of your neck stand up. . . . The setting of Blight Harbor is already strange and intriguing, with its witches and lost souls, but Senf’s adventure story is hard to put down because of its grounding emotional impact, especially the importance of facing some of life’s darkest truths in order to move on. Fans of David Almond's Skellig, Holly Black's Doll Bones, or Katherine Arden's Small Spaces series won't be disappointed by this."
— Booklist

"Evie is vulnerable and scrappy, and readers will likely empathize with her and wonder if they, too, could have boldly prioritized fearless action over a fearful state of mind."
— BCCB