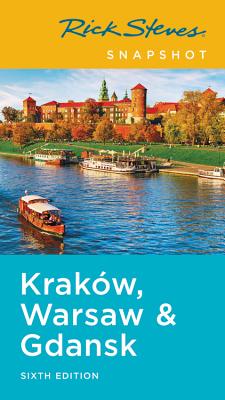 On Our Shelves Now
You can count on Rick Steves to tell you what you really need to know when traveling in Kraków, Warsaw & Gdansk.
In this compact guide, Rick Steves covers the best of these three cities, including tips on arrival, orientation, and transportation. Sample pierogi, sip local wódka, and learn about Poland's deep Jewish historyas you hit all the must-see spots, like the stunning Main Market Square, Warsaw's historic Royal Way, or Gdansk's Main Town Hall. You'll get firsthand advice on the best sights and experiences, and the maps and self-guided tours will ensure you make the most of your trip. More than just reviews and directions, a Rick Steves Snapshot guide is a tour guide in your pocket.
Rick Steves Snapshot guides consist of excerpted chapters from Rick Steves European country guidebooks. Snapshot guides are a great choice for travelers visiting a specific city or region, rather than multiple European destinations. These slim guides offer all of Rick's up-to-date advice on what sights are worth your time and money. They include good-value hotel and restaurant recommendations, with no introductory information (such as overall trip planning, when to go, and travel practicalities).
Extending your trip? Check out Rick Steves Poland.
Since 1973, Rick Steves has spent about four months a year exploring Europe. His mission: to empower Americans to have European trips that are fun, affordable, and culturally broadening. Rick produces a best-selling guidebook series, a public television series, and a public radio show, and organizes small-group tours that take over 30,000 travelers to Europe annually. He does all of this with the help of more than 100 well-traveled staff members at Rick Steves' Europe in Edmonds, WA (near Seattle). When not on the road, Rick is active in his church and with advocacy groups focused on economic and social justice, drug policy reform, and ending hunger. To recharge, Rick plays piano, relaxes at his family cabin in the Cascade Mountains, and spends time with his son Andy and daughter Jackie. Find out more about Rick at www.ricksteves.com and on Facebook.
Connect with Rick:facebook.com/RickStevestwitter: @RickStevesinstagram: ricksteveseurope
Born in Denver and raised in central Ohio, Cameron Hewitt settled in Seattle in 2000. Ever since, he has spent three months each year in Europe, contributing to guidebooks, tours, radio and television shows, and other media for Rick Steves' Europe, where he serves as content manager. Cameron married his high school sweetheart (and favorite travel partner), Shawna, and enjoys taking pictures, trying new restaurants, and planning his next trip.