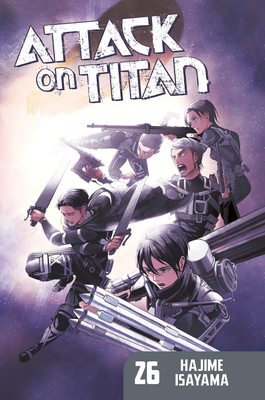 This is book number 26 in the Attack on Titan series.

Catch up on the manga before season 3 arrives in July 2018!

CLASH OF THE ELDIANS

The deadly pageant directed by and starring Willy Tybur clearly illustrates the threat posed by the island of Paradis, as the dangerous rebel Eren Yeager mows down civilians and deals a massive blow to the Marleyan army. Meanwhile, the Eldian soldiers including Mikasa, Connie, and Sasha sow chaos in the city and disrupt military communications. But the battle between Eren and the War Hammer Titan isn't over, and it's about to draw in the full might of this land's warriors...
With his debut series, "Attack on Titan," Hajime Isayama has enjoyed a meteoric rise from unknown to one of Japan's top comics artists.