Driving While Black: African American Travel and the Road to Civil Rights (Hardcover) 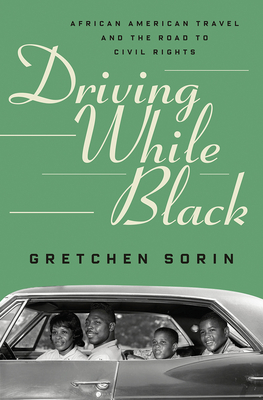 Driving While Black: African American Travel and the Road to Civil Rights (Hardcover)

It’s hardly a secret that mobility has always been limited, if not impossible, for African Americans. Before the Civil War, masters confined their slaves to their property, while free black people found themselves regularly stopped, questioned, and even kidnapped. Restrictions on movement before Emancipation carried over, in different forms, into Reconstruction and beyond; for most of the 20th century, many white Americans felt blithely comfortable denying their black countrymen the right to travel freely on trains and buses. Yet it became more difficult to shackle someone who was cruising along a highway at 45 miles per hour.

In Driving While Black, the acclaimed historian Gretchen Sorin reveals how the car—the ultimate symbol of independence and possibility—has always held particular importance for African Americans, allowing black families to evade the many dangers presented by an entrenched racist society and to enjoy, in some measure, the freedom of the open road. She recounts the creation of a parallel, unseen world of black motorists, who relied on travel guides, black only businesses, and informal communications networks to keep them safe. From coast to coast, mom and pop guest houses and tourist homes, beauty parlors, and even large hotels—including New York’s Hotel Theresa, the Hampton House in Miami, or the Dunbar Hotel in Los Angeles—as well as night clubs and restaurants like New Orleans’ Dooky Chase and Atlanta’s Paschal’s, fed travelers and provided places to stay the night. At the heart of Sorin’s story is Victor and Alma Green’s famous Green Book, a travel guide begun in 1936, which helped grant black Americans that most basic American rite, the family vacation.

As Sorin demonstrates, black travel guides and black-only businesses encouraged a new way of resisting oppression. Black Americans could be confident of finding welcoming establishments as they traveled for vacation or for business. Civil Rights workers learned where to stay and where to eat in the South between marches and protests. As Driving While Black reminds us, the Civil Rights Movement was just that—a movement of black people and their allies in defiance of local law and custom. At the same time, she shows that the car, despite the freedoms it offered, brought black people up against new challenges, from segregated ambulance services to unwarranted traffic stops, and the racist violence that too often followed.

Interwoven with Sorin’s own family history and enhanced by dozens of little known images, Driving While Black charts how the automobile fundamentally reshaped African American life, and opens up an entirely new view onto one of the most important issues of our time.

Gretchen Sorin is distinguished professor and director of the Cooperstown Graduate Program of the State University of New York. She has curated innumerable exhibits—including with the Smithsonian, the Jewish Museum and the New York State Historical Association—and lives in upstate New York.

Make[s] powerfully clear the magnitude of the injustices and harrowing encounters endured by African-Americans traveling by ‘open’ road, as well as of their quiet acts of rebellion and protest, which went far beyond having to find alternative places to eat, sleep and buy gas…. Deeply researched… Driving While Black is more focused on the history of African-American car ownership and travel, exploring why both have been so important to African-American life.... A scholarly examination of the history of black mobility in this country from the antebellum period to now, including the ongoing quest by whites in power to deny or restrict that mobility.

This excellent history illuminates how car ownership provided a measure of safety and independence and also played a vital role in the civil-rights movement.
— New Yorker

Unlike some of the more familiar narratives—the march from Selma to Montgomery that culminated in the Voting Rights Act, or Loving v. Virginia, which invalidated anti-miscegenation laws—the story Sorin tells does not conclude with a victory but with today’s crisis of mass incarceration. . . . Driving While Black highlights the dangers of such discrimination by describing the necessities that were denied to black Americans as they traveled. . . . Her argument raises an intriguing question: Can consumerism count as activism? . . . Had Driving While Black ended with the Civil Rights Act and Heart of Atlanta Motel, it would have hewed to traditional narratives of the civil rights movement, which typically begin with a struggle against legalized discrimination, climax with nonviolent protest, and conclude with a legislative or courtroom victory. But a triumphant history that ends with a hard-won anti-discrimination law would seem naive today, especially when poverty and injustice exact an uneven toll on people of color. Instead, Driving While Black jumps to the 1990s and continues to the present day in its epilogue.

Driving While Black is a marvel. It is the work of a brilliant mind and a beautiful heart. Sorin, a professor at State University of New York at Albany, dazzles with plain language. She writes in a way that academics and laypersons will both admire. Sorin combines impeccable, exhaustive research and personal stories with a seamless elegance, somehow managing to hold the object under examination far enough away to consider it fully and close enough to really inhabit it.

The sweeping story of African Americans and automobiles—a tale of mobility and mobilization that helped fuel the Civil Rights Movement.
— Erin Blakemore, Smithsonian

A riveting story on how the automobile opened up opportunities for blacks in the U.S…. In Sorin’s work, her prose and talent for turning examples into captivating stories prevent the book from being a mere sociological study of how black travel changed the nation. Instead, she blends her own family’s history, and those who experienced the black travel revolution, to make the book enjoyable and noteworthy since it shows how the changes ushered in civil rights.
— Russell Contreras, Associated Press

Driving While Black also chronicles the rise of car culture in tandem with rock ‘n’ roll music (Chuck Berry loved his Cadillacs), as well as the vast network of black-friendly establishments outlined in the popular Green Book. Feeling gassed up yet? Grab this book to-go and get to reading.

Sorin’s engaging account of black motoring exposes a rough road in race relations but also a technology’s impact on black freedom. A great resource for people learning about black freedoms—and the fragility of those freedoms—in the automobile era and during the civil rights movement.
— Library Journal

An eye-opening history of the terrible discrimination practiced routinely against African American drivers. . . [A] powerful story. . . The author provides an in-depth look at the significance of Victor Green’s (literally) lifesaving The Green Book. . . A pleasing combination of terrific research and storytelling and engaging period visuals.

Gretchen Sorin has spent decades exploring this deeply researched, acutely felt, and penetrating study of race, space, and mobility in America—and a lifetime thinking about the issues and experiences that underlie it. No one who reads Driving While Black can fail to be moved and wonderstruck by how far American society has come in the last century and a half in forwarding the dream of equal mobility for all, and by how far we still have to go.

With chronological sweep and intimate detail, Gretchen Sorin takes us on an unsettling road trip, showing us how African American travelers met with indignities, discrimination, and violence, and how they fought for their basic dignity. From the famous Green Book to black-run lakeside resorts, Sorin offers a powerful revision of the romance of roadside Americana.
— Thomas J. Sugrue, author of Sweet Land of Liberty: The Forgotten Struggle for Civil Rights in the North

Driving While Black is painful, poignant, and powerful. White America cannot imagine being unwelcomed and unwanted in stopping for a meal or a motel room on a long trip. But the fact is that this was for decades the harsh reality for millions of our fellow citizens. Through compelling and extensive interviews, illustrations, and evidence, Gretchen Sorin has meticulously documented yet another disturbing aspect of racism in our national life.

This is the first authoritative book about the actual social, economic, and political history of African-Americans and cars. Sorin’s accessible style invites the reader see how the open road looked from black people’s points of view. Interspersed with anecdotes and family stories, her history is authoritative, pungent, and personal. This volume is a ground-breaking roadmap of the black experience behind the wheel.
— Fath Davis Ruffins, Curator, National Museum of American History