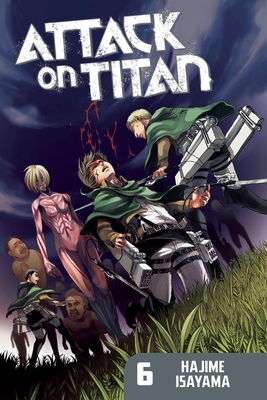 This is book number 6 in the Attack on Titan series.

TITAN ON THE HUNT

On the way to Eren’s home, deep in Titan territory, the Survey Corps ranks are broken by a charge led by a female Titan! But this Abnormal is different – she kills not to eat but to protect herself, and she seems to be looking for someone. Armin comes to a shocking conclusion: She’s a human in a Titan’s body, just like Eren!
Hajime Isayama first published Attack on Titan in Bessatsu Shōnen Magazine in 2009. It became a sleeper hit and won the Kodansha Manga Award in shōnen category in 2011. This is his first manga.