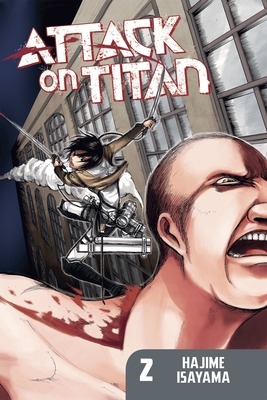 This is book number 2 in the Attack on Titan series.

BIRTH OF A MONSTER

The Colossal Titan has breached humanity’s first line of defense, Wall Maria. Mikasa, the 104th Training Corps’ ace and Eren’s best friend, may be the only one capable of defeating them, but beneath her calm exterior lurks a dark past. When all looks lost, a new Titan appears and begins to slaughter its fellow Titans. Could this new monster be a blessing in disguise, or is the truth something much more sinister?

This volume of Attack on Titan includes special extras after the story!

The megahit Attack on Titan anime finally returns, streaming on April 1!
Hajime Isayama first published Attack on Titan in Bessatsu Shōnen Magazine in 2009. It became a sleeper hit and won the Kodansha Manga Award in shōnen category in 2011. This is his first manga.