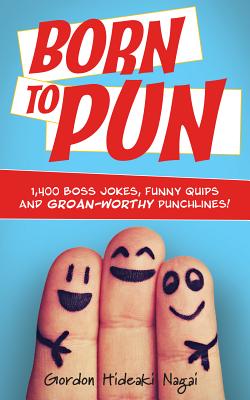 
Not currently on our shelves. Usually Ships in 1-5 Days
Discover all the most cringe-inducing puns and bad dad jokes you never thought you needed to know.

Make every day funny punny with this massive book of over 1,400 puns. Perfect for word nerds, class clowns, and dads everywhere, never miss an opportunity to deliver a groan-inducing, yet hilarious one-liner.

• The pliers said to the wrench, “Get a grip. You're losing it!"

• The marionette’s cardiologist warned him to change his lifestyle because he was too high-strung.

• When the President’s family picnic was hit by a cold hard rain, the band struck up “Hail to The Chief".

• Q: How do vampires like their stakes?
A: Rare.

• Do dealers in Las Vegas casinos walk with a shuffle?

• The young ear of corn was considered a rising star in the Marine Corps; he quickly rose to the rank of kernel.
Gordon Hideaki Nagai is a father and grandfather who loves creating and sharing jokes with his grandchildren. He is also the author of The Ultimate Book of Dad Jokes. Now retired, Gordon worked as a case manager in social service in the Bay Area and has Masters in Social Welfare from U.C. Berkeley. Originally from Atwater, California, Gordon is a second generation Japanese-American who currently lives with his wife of 55 years close to his four grandchildren in Eugene, OR.