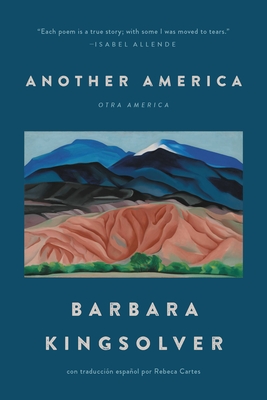 From a bestselling and beloved author, an intensely personal collection of poetry “rich with political and human resonance” (Ursula K. LeGuin)

Before becoming the bestselling author we know today, Barbara Kingsolver, as a new college graduate in search of adventure, moved to the borderlands of Tucson, Arizona. What she found, she says, was “another America.”

Interweaving past political events, from the US-backed dictatorships in South America to the government surveillance carried out in the Reagan years, Kingsolver’s early poetry expands into a broader examination of the racism, discrimination, and immigration system she witnessed at close range. The poems coalesce in a record of her emerging adulthood, in which she confronts the hypocrisy of the national myth of America—a confrontation that would come to shape her not only as an artist, but as a citizen. With a new introduction from Kingsolver that reflects on the current border crisis, Another America is a striking portrait of a country deeply divided between those with privilege and those without, and the lives of urgent purpose that may be carved out in between.

Barbara Kingsolver is the author of sixteen books of fiction, poetry, and creative nonfiction and is the recipient of the National Humanities Medal. She is a member of the American Academy of Arts and Letters, and the founder of the PEN/Bellwether Prize for Socially Engaged Fiction. She lives with her husband on a farm in southern Appalachia.

“Barbara Kingsolver belongs in the company of such poets as Clifton, Levertov, Hogan, Forché and Rich. Her pure American voice, chorded in both the great American languages, is rich with political and human resonance.”—Ursula K. LeGuin

“Each poem is a true story; with some I was moved to tears.”—Isabelle Allende

“These poems made me stop mid-book, telephone a friend and brave saying the unsayable – palabras del corazón that often go unsaid.”—Sanda Cisneros

“This powerful collection of poetry deals with protest against political and social repression experienced by ordinary people, particularly women, under military regimes in Central and South America during the last 20 years. Through vivid imagery and compelling messages, Kingsolver makes a passionate appeal to end the suffering of victims of revolution, oppression, and war.” —School Library Journal

“[Kingsolver’s] poems present a vision of an underprivileged America redressed, and are, in that respect, songs of hope and longing as opposed to howls of protest and despair.”—Foreword Magazine