Dukes Do It Better (Misfits of Mayfair #3) (Mass Market) 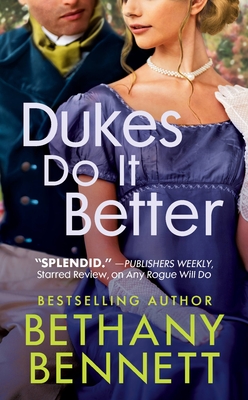 Dukes Do It Better (Misfits of Mayfair #3) (Mass Market)

This is book number 3 in the Misfits of Mayfair series.

She can keep her secrets or risk her heart

Lady Emma Hardwick has been living a lie—one that allowed her to keep her son and give him the loving home she’d never had. But now her journal, the one place she’d indulged in the truth, has been stolen. Whoever has it holds the power to bring the life she’s carefully built crumbling to the ground. With her past threatening everything she holds dear, the only person she can trust is the dangerously handsome, tattooed navy captain with whom she dared to spend one carefree night.

Captain Malachi Harlow, Duke of Trenton, would rather throw himself overboard than return to society. But when the Admiralty calls him back home, there is no room for refusal. Crossing paths with the delectable Lady Emma is a welcome distraction that takes a more serious turn when they discover they have a common enemy. Working together could help them both—but will it also bring a temptation neither can resist?
Bethany Bennett grew up in a small fishing village in Alaska where required learning included life skills like cold-water survival, along with several other subjects that are utterly useless as a romance writer. Eventually settling in the Northwest with her real-life hero and two children, she enjoys mountain views from the comfort of her sofa, wearing a tremendous amount of flannel, and drinking more coffee than her doctor deems wise.
"Packed with disguises, debts, and debutantes, this delightful Regency does not disappoint."—Publishers Weekly, starred review, on West End Earl

"In [a] splendid Regency-set debut . . . Bennett turns a spotlight on the class distinctions and gender restrictions of 1819 England, with a formidable leading lady and a swoon-worthy hero with lower-class roots. Filled with gripping drama, strong characters, and steamy seduction, this tantalizing story is sure to win the hearts of Regency fans."—Publishers Weekly, starred review, on Any Rogue Will Do

"Everything I adore in a Regency--wit, steam, and heart!"—Grace Burrowes, New York Times bestselling author

"A beautiful tale that weaves second chances, genuine characters, and heartfelt emotion into a satisfying happily-ever-after."—Kelly Bowen on Any Rogue Will Do