American Mother: The True Story of a Troubled Family, Motherhood, and the Cyanide Murders That Shook the World (Paperback) 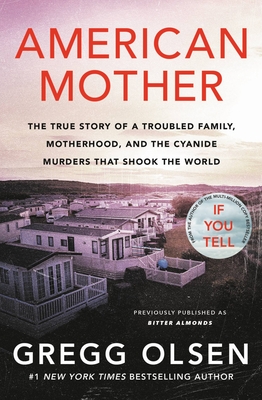 American Mother: The True Story of a Troubled Family, Motherhood, and the Cyanide Murders That Shook the World (Paperback)


On Our Shelves Now
Read the Wall Street Journal bestseller from the #1 New York Times bestselling author of If You Tell--an absolutely unputdownable and chilling true-crime story of Stella Nickell—a mother and wife who did the unthinkable… and the unforgiveable.

At 5.02 pm on June 5, 1986, an emergency call came into the local sheriff’s office in the small town of Auburn, Washington State. A distressed housewife, Stella Nickell, said her husband Bruce was having a seizure. Officers rushed to the Nickell’s mobile home, to find Stella standing frozen at the door… Bruce was on the floor fighting for his life.

As Stella became the beneficiary of over $175,000 in a life insurance pay-out, forensics discovered that Bruce had consumed painkillers laced with cyanide.

A week later, fifteen-year-old Hayley was getting ready for another school day. Her mom, Sue, called out ‘I love you’ before heading into the bathroom and moments later collapsed on the floor. Sue never regained consciousness, and the autopsy revealed she had been poisoned by cyanide tainted headache pills. Just like Bruce.

While a daughter grieved the sudden and devastating loss of her mother, a young woman, Cindy, was thinking about her own mom Stella. She thought about the years of neglect and abuse, the tangled web of secrets Stella had shared with her, and Cindy contemplated turning her mom into the FBI…

Gripping and heart-breaking, Gregg Olsen uncovers the shocking true story of a troubled family. He delves into a complex mother-daughter relationship rooted in mistrust and deception, and the journey of the sweet curly-haired little girl from Oregon whose fierce ambition to live the American Dream led her to make the ultimate betrayal.

Originally published as Bitter Almonds. Revised and updated edition.
A #1 New York Times bestselling true-crime writer, Gregg Olsen is praised for his ability to create a detailed narrative that offers readers fascinating insights into the lives of real people and fictional characters caught in extraordinary circumstances.  He has authored ten nonfiction books, over twenty novels, a novella, and a short story, which appeared in a collection edited by Lee Child.  In addition to television and radio appearances, he has been featured in Redbook, USA Today, People, Salon magazine, Seattle Times, Los Angeles Times and the New York Post.  He is a native of Seattle and currently lives in rural Washington state.