The Widowed Ones: Beyond the Battle of the Little Bighorn (Hardcover) 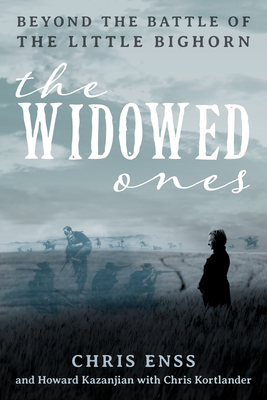 The Widowed Ones: Beyond the Battle of the Little Bighorn (Hardcover)

On Our Shelves Now
There weren't many women in the late 1800s who had the opportunity to accompany their husbands on adventures that were so exciting they seemed fictitious. Such was the case for the women married to the officers in General George Armstrong Custer's Seventh Cavalry. There were seven officers' wives. They were all good friends who traveled from post to post with one another along with their spouses. Of the seven widows, Elizabeth Custer was the most well-known. As the wife of the commanding officer, Libbie felt it was her duty to be present when the officer's wives at Fort Lincoln were told their husbands had been killed at the Battle of the Little Bighorn. The women were overwhelmed with letters of condolence. Most people were sincere in their expressions of sorrow over the widows' loss. Others were ghoulish souvenir hunters requesting articles of their husbands' clothing and personal weapons as keepsakes. The press was preoccupied with how the wives of the deceased officers were handling their grief. During the first year after the tragic event, reporters sought them out to learn how they were coping, what plans they had for the future, and what, if anything, they knew about the battle itself. The widows were able to soldier through the scrutiny because they had one another. They confided in each other, cried without apologizing, and discussed their desperate financial situations. The friendship the bereaved widows had with one another proved to be a critical source of support. The transition from being officers' wives living at various forts on the wild frontier to being single women with homes of their own was a difficult adjustment. Without one another to depend upon, the time might have been more of a struggle. The Widowed Ones: Beyond the Battle of the Little Bighorn tells the stories of these women and the unique bond they shared through never-before-seen materials from the Elizabeth Custer Library and Museum at Garryowen, Montana, including letters to and from politicians and military leaders to the widows, fellow soldiers and critics of George Custer to the widows, and letters between the widows themselves about when the women first met, the men they married, and their attempts to persevere after the tragedy.
Chris Enss is a New York Times best-selling author who has been writing about women of the Old West for more than twenty years. She has penned more than forty published books on the subject. Her work has been honored with five Will Rogers Medallion Awards, two Elmer Kelton Book Awards, an Oklahoma Center for the Book Award, and was a Western Writers of America Spur Award Finalist. Her books Thunder Over the Prairie, The Death Row All Stars, and The Trials of Annie Oakley have been optioned by major production companies for feature films. Enss's most recent works are According to Kate: The Legendary Life of Big Nose Kate, Love of Doc Holliday; No Place for a Woman: The Struggle for Suffrage in the Wild West; and Iron Women: The Ladies Who Helped Build the Railroad. Enss is the current president of Western Writers of America, serves as executive director of the Will Rogers Medallion Award, and is a licensed private investigator. Howard Kazanjian is an award-winning producer and entertainment executive who has been producing feature films and television programs for more than twenty-five years. Christopher Kortlander has been a Western Americana collector and dealer for most of his adult life. His personal collection was assembled over several decades and features some of the rarest and most desirable works and historic collectibles in the province of the Indian Wars and America's Westward expansion. Kortlander's appreciation for the unique history and grandeur of the West goes far beyond building his own amazing personal collection of books, manuscripts, and Western Americana collectibles. In addition, Kortlander published Custer In Photographs, and produced a play, Libbie, which offered a new take on the battle and its aftermath.