Fire and Forge: A Desert Railroad, a Wonder Metal, and the Making of an Aerospace Blacksmith (Hardcover) 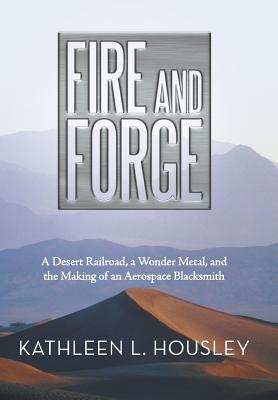 Fire and Forge: A Desert Railroad, a Wonder Metal, and the Making of an Aerospace Blacksmith (Hardcover)

Not currently on our shelves. Usually Ships in 1-5 Days
Harry Rosenberg grew up near the hottest place on Earth-Death Valley-in a very unusual dwelling: a red caboose. His father repaired bridges for the Tonopah & Tidewater Railroad, which hauled ore from remote mines. During the Depression, the Rosenbergs traveled from washout to washout across a fiery land prone, paradoxically, to devastating floods of the Amargosa and Mojave Rivers. No other place on Earth was better suited to forge a curious boy into a metallurgist who would spend his life unlocking the vast potential of a difficult, new metal-titanium.

In Fire and Forge, author Kathleen L. Housley tells Rosenberg's life story-working as a miner, having a chance meeting with a geologist studying Death Valley, earning a PhD from Stanford, gaining patents for aerospace alloys, and founding a company that manufactures the purest titanium in the world.

This biography captures the essence of a man whose work as a metallurgist left an impact on the world, but it also communicates Rosenberg's love for his roots. No matter how far he traveled, no matter the number of his successes, he never really left the Mojave Desert and the Amargosa River-it still flows through his veins.