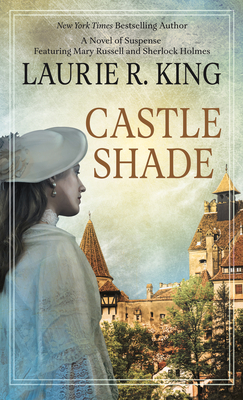 This is book number 17 in the Mary Russell and Sherlock Holmes series.

A queen, a castle, a dark and ageless threat--all await Mary Russell and Sherlock Holmes in this chilling new adventure. The queen is Marie of Roumania: the doubly royal granddaughter of Victoria, Empress of the British Empire, and Alexander II, Tsar of Russia. A famous beauty who was married at seventeen into Roumania's young dynasty, Marie had beguiled the Paris Peace Conference into returning her adopted country's long-lost provinces, singlehandedly transforming Roumania from a backwater into a force. The castle is Bran: a tall, quirky, ancient structure perched on high rocks overlooking the border between Roumania and its newly regained territory of Transylvania. The castle was a gift to Queen Marie, a thank-you from her people, and she loves it as she loves her own children. The threat is . . . well, that is less clear. Shadowy figures, vague whispers, the fears of girls, dangers that may be only accidents. But this is a land of long memory and hidden corners, a land that had known Vlad the Impaler, a land from whose churchyards the shades creep. When Queen Marie calls, Mary Russell and Sherlock Holmes are as dubious as they are reluctant. But a young girl is involved, and a beautiful queen. Surely it won't take long to shine light on this unlikely case of what would seem to be strigoi? Or, as they are known in the West . . . vampires.
Laurie R. King is the award-winning, bestselling author of sixteen Mary Russell mysteries, five contemporary novels featuring Kate Martinelli, and many acclaimed stand-alone novels such as Folly, Touchstone, The Bones of Paris, and Lockdown. She lives in Northern California, where she is at work on her next Mary Russell mystery.