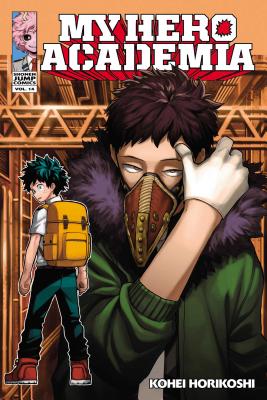 This is book number 14 in the My Hero Academia series.

Summer vacation is over, and it’s back to school for the students of U.A. High! But before classes can get started, Midoriya and Bakugo need to settle a beef between them that’s been a long time coming. Even if they can get past this bump in the road on the way to becoming superheroes, the hurdles will just keep getting higher and higher—the hero work studies in the upcoming year will bring them even closer to their goal…or their destruction!
Kohei Horikoshi was born in Aichi, Japan, in 1986. He received a Tezuka Award Honorable Mention in 2006, and following the publication of several short stories in Akamaru Jump, his first serialized work in Weekly Shonen Jump was Oumagadoki Zoo in 2010. My Hero Academia is his third series in Weekly Shonen Jump.