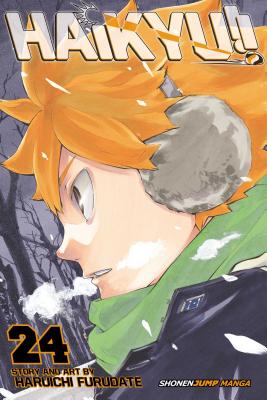 This is book number 24 in the Haikyu!! series.

Karasuno has qualified for the Spring Tournament! The team buckles down to practice harder than ever, but their adviser, Takeda, immediately rushes in to announce that Kageyama has been invited to participate in the All-Japan Under 19 Youth Training Camp, while Tsukishima has been invited to a prefectural rookie training camp. Overflowing with jealousy at the unparalleled opportunities presented to his peers, Hinata takes it upon himself to get in on the action and crashes Tsukishima’s training camp.
Haruichi Furudate began his manga career when he was 25 years old with the one-shot Ousama Kid (King Kid), which won an honorable mention for the 14th Jump Treasure Newcomer Manga Prize. His first series, Kiben Gakuha, Yotsuya Sensei no Kaidan (Philosophy School, Yotsuya Sensei’s Ghost Stories), was serialized in Weekly Shonen Jump in 2010. In 2012, he began serializing Haikyu!! in Weekly Shonen Jump, where it became his most popular work to date.