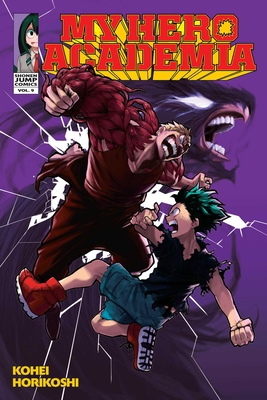 This is book number 9 in the My Hero Academia series.

It’s off to summer camp for Midoriya and the U.A. students! But this is no ordinary vacation—it’s high-impact training where the students are expected to develop their Quirks even further! The teachers have set up some tough challenges, but none will be as difficult and as life changing as the threat a new group of enemies poses. What’s even worse is who the villains’ target is and why…
Kohei Horikoshi was born in Aichi, Japan, in 1986. He received a Tezuka Award Honorable Mention in 2006, and following the publication of several short stories in Akamaru Jump, his first serialized work in Weekly Shonen Jump was Oumagadoki Zoo in 2010. My Hero Academia is his third series in Weekly Shonen Jump.