Chasing History: A Kid in the Newsroom (Paperback) 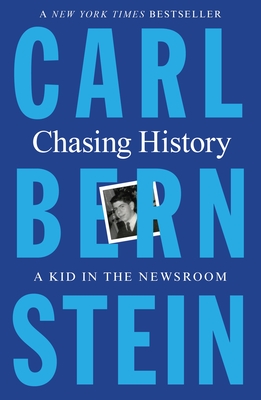 Chasing History: A Kid in the Newsroom (Paperback)

In this triumphant memoir, Carl Bernstein, the Pulitzer Prize-winning coauthor of All the President’s Men and pioneer of investigative journalism, recalls his beginnings as an audacious teenage newspaper reporter in the nation’s capital—a winning tale of scrapes, gumshoeing, and American bedlam.

In 1960, Bernstein was just a sixteen-year-old at considerable risk of failing to graduate high school. Inquisitive, self-taught—and, yes, truant—Bernstein landed a job as a copyboy at the Evening Star, the afternoon paper in Washington. By nineteen, he was a reporter there.

In Chasing History: A Kid in the Newsroom, Bernstein recalls the origins of his storied journalistic career as he chronicles the Kennedy era, the swelling civil rights movement, and a slew of grisly crimes. He spins a buoyant, frenetic account of educating himself in what Bob Woodward describes as “the genius of perpetual engagement.”

Funny and exhilarating, poignant and frank, Chasing History is an extraordinary memoir of life on the cusp of adulthood for a determined young man with a dogged commitment to the truth.

Carl Bernstein is the author or coauthor of a number of bestselling books, most notably All the President’s Men, written with Bob Woodward. He, Woodward, and the Washington Post were awarded the Pulitzer Prize for Public Service for breaking and investigating the Watergate story, which led to the resignation of President Richard Nixon and set the standard for modern investigative reporting. He is also the author of biographies of Pope John Paul II and Hillary Clinton and a memoir of his family’s experiences during the McCarthy era. He is currently an on-air political analyst for CNN and a contributing editor for Vanity Fair. He lives in New York City.

“His career spans the profession’s best of times and the worst, though the story he tells in Chasing History evokes only the happy days. . . . Carl Bernstein’s book, which is ultimately a eulogy for print newspapers, is a passionate reminder of exactly what is being lost.”
—Jill Abramson, The New York Times Book Review

“[A] charming new memoir. . . . This is a book chiefly distinguished by nostalgia and warmth.”
—Thomas Mallon, The Wall Street Journal

“Bernstein doesn't mention his later fame in Chasing History—this is a memoir limited to a set period of time, and he resists the urge to look forward. This gives the book its strength: It's not self-aggrandizing; it's content to be what it is, the story of a few years in the life of a young man getting his foothold in journalism. The book is marked by an appealing humility; while others might regard Bernstein as a living legend, his own opinion of himself seems much more measured.”
—NPR

“His picture of life on the Star is both vivid and elegiac. He captures the frantic rhythms of a big newspaper and its multiple editions—the first published at 11am, the last after Wall Street’s close—and the craft of the men and (still relatively few) women who made it all happen.”
—The Economist

“A warm and inviting read.”
—The Guardian

“At its best . . . Chasing History offers a unique view on American history and one journalist's maturation.”
—Minneapolis Star Tribune

“Chasing History is the brilliantly crafted personal story of Carl Bernstein's self-education as one of the great reporters of all time. He taught himself the genius of perpetual engagement that led us to Watergate—watching, looking, questioning, and overwhelming the moment. His rules—go anywhere, listen hard, push and push some more—are, to this day, the touchstone in investigative reporting."
—Bob Woodward, Pulitzer Prize-winning reporter and author of 14 #1 New York Times best-selling books

“I loved getting to know the teenage Carl Bernstein, a smart and spirited kid who happened upon the best seat in the country at an extraordinary moment in our national life. The reader marvels as Bernstein, equipped with infinite curiosity and grit, goes from copyboy to newsman, from chasing history to making it.”
—Doris Kearns Goodwin, presidential historian and Pulitzer Prize–winning, New York Times #1 bestselling author

“Engaging and vivid, this memoir of the beginning of Carl Bernstein’s journalistic journey is a welcome reminder of how important the press is, and how much fun it used to be. Reading it I was put in the mind of Russell Baker—always a good thing. A terrific read!”
—Jon Meacham, #1 New York Times bestselling author of His Truth Is Marching On: John Lewis and the Power of Hope

“Carl Bernstein’s Chasing History is an irresistible, beautifully written memoir, not just of Carl’s own coming of age but also of the nation’s capital at a time of momentous social and cultural change. The book spans the period exactly 100 years after the Civil War years, and the epic struggle for racial justice is a major theme. Along the way we meet a host of indelible characters, including some of the greatest journalists of their generation. In a sense, Chasing History is misnamed: Bernstein captures his quarry, magnificently.”
—Eugene Robinson, Washington Post columnist and MSNBC political commentator

“The author’s reminiscences of old-school journalism—with its chaotic newsrooms, hot type, and guarded friendships among sources and writers—will please newspaper buffs, those who read the memoirs of H.L Mencken and Joseph Mitchell. . . . An appealingly nostalgic view of a political past unriven by political tribalism, chronicled by a reporter with an eye on history.”
—Kirkus

“Admirers of this remarkable journalist will find much to love in this charming account.”
—Publishers Weekly, starred review