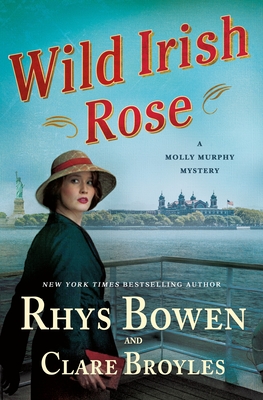 This is book number 18 in the Molly Murphy Mysteries series.

New York Times bestselling author Rhys Bowen, now writing in partnership with her daughter, Clare Broyles, transports and enthralls readers through the incomparable Molly Murphy Sullivan. Wild Irish Rose is the next novel in this beloved mystery series, a cause for celebration for readers and critics alike.

New York, 1907: Now that she’s no longer a private detective—at least not officially—Molly Murphy Sullivan is looking forward to a time of settled tranquility with friends and family. Back in New York, where her own story began, Molly decides to accompany some friends to Ellis Island to help distribute clothing to those in need. This journey quickly stirs up memories for Molly. When you’re far from home and see people from your country, every face looks like a family member.

That evening Molly’s policeman husband, Daniel, is late returning home. He comes with a tale to tell: there was a murder on Ellis Island that day, and the main suspect is the spitting image of Molly. The circumstances are eerily similar to when Molly herself arrived on Ellis Island, and she can’t help but feel a sense of fate. Molly was meant to be there that day so that she can clear this woman’s name.

CLARE BROYLES, who is Rhys Bowen's daughter, is a teacher and a musician. She began collaborating with her mother on the Molly Murphy mystery series with Wild Irish Rose. She has worked as a composer and arranger in the theater for both Arizona Theater Company and Childsplay and was nominated for an Arizone 'Zoni' theater award. Clare is married to a teacher and they have three children.

“[Bowen and Broyles deliver] a satisfying domestic mystery, rich in the details of running a middle-class urban household in the early twentieth century.” —Booklist

Praise for Rhys Bowen and the Molly Murphy Mysteries

“One of the great mystery writers working today.” —Louise Penny

"Molly is sassy, saucy, brave and smart.” —The Huffington Post

“Readers will surely testify that Murphy has become one of their favorite characters… This book is a keeper.” —Tampa Tribune