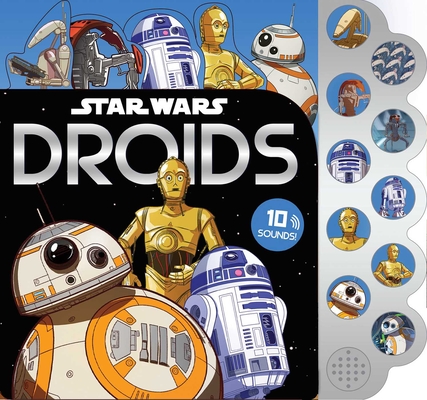 
Backordered Title, Not on our shelves: Call to check availability.
Press 10 buttons to hear sound effects and voices from the different droids existing in a galaxy far, far away...

Learn about all the cool droids in the Star Wars galaxy as you press 10 buttons to hear the robotic sounds and voices from the movies. R2-D2, C-3PO, BB-8, and many more are sure to entertain fans of all ages with their humorous sound bites and beeps.
Benjamin Harper worked as an editor at Lucas Licensing. He edited many Wizards of the Coast roleplaying publications, including Star Wars Gamer magazine, Rebellion Era Sourcebook, The Dark Side Sourcebook, and the Living Force Campaign Guide. During his time at Lucasfilm, he also wrote several news articles about Star Wars celebrities for the recurring Star News and Star Sightings features in Star Wars Insider magazine. Harper has published more than 40 titles, including four Star Wars trivia books.

The passionate team at Pilot Studio represents a close-knit, yet diverse range of skill sets. We regularly open our studio to clients and teams who wish to host workshops or work directly with our crew. We designed our space to be an open studio for collaboration—a hub for integrating disciplines, hosting workshops, and solving challenges together. Located on the waterfront in Boston's Innovation District, we are a short walk from downtown, and quick ride from Logan International airport.