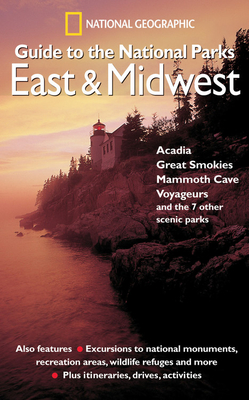 
Backordered Title, Not on our shelves: Call to check availability.
Following the best-selling, comprehensive National Geographic Guide to the National Parks of the United States, this series of regional guides features in-depth coverage and breathtaking images of all the major parks in each region, as well as information about national wildlife refuges, national seashores, forests, preserves, and other scenic areas. Full of suggestions on when to go and what to see and do, the guides also include guided driving tours and hikes, and special features and sidebars on not-to-be-missed flora and fauna, historical sites, and spectacular landscapes. The focus of each guide are the awe-inspiring scenic national parks in each region. In the West, Yellowstone and Yosemite loom largest, while in the Southwest, the Grand Canyon, Zion, and Death Valley are popular favorites. The East and Midwest is the largest region with the greatest diversity of parks, from the Everglades and Dry Tortugas to Mammoth Cave and Voyageurs. Finally, Alaska is a world all its own with eight major parks-Denali, Gates of the Arctic, Glacier Bay, Katmai, Kenai Fjords, Kobuk Valley, Lake Clark, and Wrangell-St. Elias-and many other fascinating natural areas to explore and enjoy. With these beautifully illustrated and completely reliable National Geographic regional guides in hand, visitors are guaranteed unforgettable national park vacations.
National Geographic Society is one of the largest nonprofit scientific and educational organizations in the world. Founded in 1888, it reaches more than 285 million people worldwide each month through its official journal, National Geographic, and its four other magazines, as well as the National Geographic Channel, television documentaries, radio programs, films, books, maps, and interactive media. National Geographic has funded more than 8,000 scientific research projects and supports an education program combating geographic illiteracy.