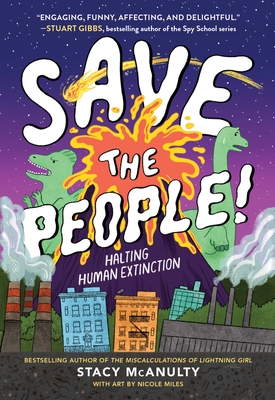 
On Our Shelves Now
"Save the People is engaging, funny, affecting and delightful. You’ll never have more fun learning science." --Stuart Gibbs, bestselling author of the Spy School series

"Serious science and great gags, with a bit of hope thrown in.” --Steven Sheinkin, bestselling author of Bomb and Fallout

An action-packed look at past, present, and future threats to humanity’s survival—with an ultimately reassuring message that humans probably have a few more millennia in us.

Scientists estimate that 99% of all species that have ever existed are now extinct. Whoa. So, it's not unreasonable to predict humans are doomed to become fossil records as well. But what could lead to our demise? Supervolcanos? Asteroids? The sun going dark? Climate change? All the above?!

Humans—with our big brains, opposable thumbs, and speedy Wi-Fi—may be capable of avoiding most of these nightmares. (The T. rex would be super jealous of our satellites.) But we're also capable of triggering world-ending events. Learning from past catastrophes may be the best way to avoid future disasters.

Packed with science, jokes, and black and white illustrations, Save the People! examines the worst-case scenarios that could (but hopefully won’t) cause the greatest mass extinction—our own!

Stacy McAnulty doesn’t think the world will end suddenly, but she does worry about the ongoing damage to the environment caused by her species. Nonetheless, she believes Homo sapiens can overcome challenges and reverse course by taking action. Before becoming an author, Stacy was a mechanical engineer (and before that—like in fourth grade—she was an aspiring astronaut). Her love of math and science is reflected in most of her books. She writes chapter books, middle-grade novels, including The Miscalculations of Lightning Girl, and picture books, including the Our Universe series, which explores space and the natural world. Save the People is her debut middle-grade nonfiction. Originally from New York, she now lives in North Carolina with her family.

*"A casual but damning account of the future of our species, bound to turn many youngsters into climate activists."—School Library Journal, starred review

*“This book is full of dire facts, but it’s not doom and gloom. Its lively, conversational tone with plenty of jocular asides keeps it unintimidating and accessible…Lively writing, pertinent science, and an urgent topic make this a must-read for all.”—Kirkus Reviews, starred review

“Stacy McAnulty has done the impossible: Writing a book about mass extinction that is a joy to read. Save the People is engaging, funny, affecting and delightful. You’ll never have more fun learning science.”—Stuart Gibbs, bestselling author of the Spy School series

“Serious science and great gags, with a bit of hope thrown in.”—Steve Sheinkin, author of Bomb and Fallout

"What could easily come off as an apocalyptic, science-based horror story, author Stacy McAnulty instead handles with humor . . . backed by thorough research which is documented in an extensive notes section.​"—School Library Connection