We Go High: How 30 Women of Colour Achieved Greatness against all Odds (Hardcover) 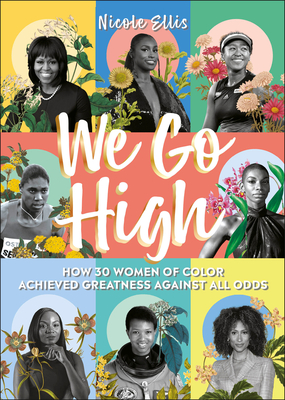 We Go High: How 30 Women of Colour Achieved Greatness against all Odds (Hardcover)


On Our Shelves Now
Follow the life lessons of 30 remarkable women of color who are making their mark on society and culture.

"When you are struggling and you start thinking about giving up, I want you to remember something ... and that is the power of hope." -Michelle Obama (White House speech, 2017)

We Go High brings together the inspiring stories, motivational quotes, and personal philosophies of 30 influential women of color who have sought to overcome challenges in their lives.

From activists to scientists, artists to sporting icons, each woman's story is different-but all have in common a deep-seated resilience to fight against the prejudices and barriers to success that women of color face on a daily basis. The book features political powerhouses such as Kamala Harris and Stacey Abrams, as well as businesswomen like Arundhati Bhattacharya and Angelica Ross, and writers Michaela Coel and Amanda Gorman.

With 30 stunning, specially commissioned portraits, We Go High not only celebrates these remarkable women's achievements, but uncovers the personal beliefs, attitudes, and determination that drive them.
Nicole Ellis is a journalist and digital anchor for PBS NewsHour. Nicole previously worked at The Washington Post, covering social issues and hosting and directing documentaries and breaking news videos for The Post’s website and social media channels, for which she received an Emmy nomination in 2017. Her documentary series Should I Freeze My Eggs? won the 2019 Digiday Publishers Award. She also created and hosted the Webby Award–winning news literacy series The New Normal, the most viewed video series in the history of The Washington Post’s women’s vertical, The Lily. She is the author of We Go High, and host of Critical Conversations on BookClub, an author-led book club platform. You can find more of Nicole’s work at NicoleEllis.info.