Encyclopedia of Insects: an illustrated guide to nature's most weird and wonderful bugs - Contains over 300 insects! (Hardcover) 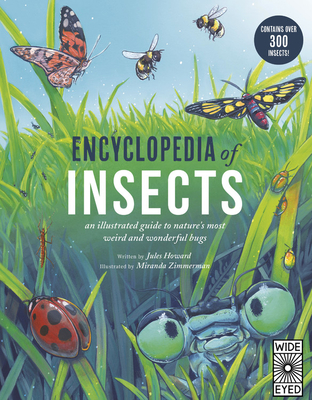 Encyclopedia of Insects: an illustrated guide to nature's most weird and wonderful bugs - Contains over 300 insects! (Hardcover)


Not currently on our shelves. Usually Ships in 1-5 Days
Dive into the world of creepy-crawlies in this Encyclopedia of Insects.

Packed with hundreds of bugs, every one is looked at in fascinating detail by natural history expert Jules Howard.

From the cutest and most beautiful, to the deadliest and most disgusting, there's something for everyone in this book which highlights the importance of the insect world. Plus, find out what actually makes an insect, an insect – with guest entries from the non-insects: centipedes, spiders, woodlice, and snails.

Jules Howard is an author, zoology correspondent, and science presenter. As well as writing regularly for The Guardian and BBC Wildlife Magazine, Jules appears regularly on TV and radio, including BBC Breakfast. He has written numerous books for both adults and children on the natural world.

Miranda Zimmerman combines scientific expertise and illustration skill to create beautiful artwork of the natural world. She graduated from California State University, Monterey Bay, with a bachelor’s degree in Evolutionary Biology. She then went on to acquire her graduate certificate in Science Illustration, and spent three months working on paleontological reconstruction at the Field Museum of Natural History in Chicago. She now resides in the Pacific Northwest, taking on freelance work and creating FaunCreatures to fill her fictional universe. Clients include Oculus Rift, The Field Museum, and independent researchers.