The Night in Question (An Agathas Mystery #2) (Hardcover) 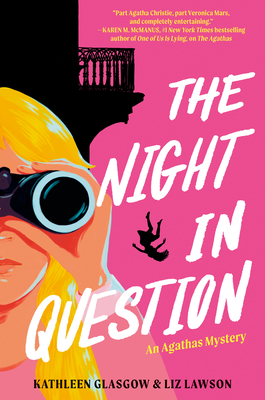 The Night in Question (An Agathas Mystery #2) (Hardcover)

This is book number 2 in the An Agathas Mystery series.

How do you solve a murder? Follow the lessons of the master—Agatha Christie! Iris and Alice find themselves in the middle of another Castle Cove mystery in the sequel to New York Times bestseller The Agathas, by powerhouse authors Kathleen Glasgow and Liz Lawson.

Last October, Alice Ogilvie's ex-best friend, Brooke Donovan, was killed—and if it weren't for Alice's unlikely alliance with her tutor, Iris Adams, and her library of the complete works of Agatha Christie, the wrong person would almost certainly be sitting in prison for the crime. The Castle Cove police aren't exactly great at solving crimes. In fact, they're notorious for not solving crimes.

Which is why, on the night of Castle Cove High's annual Sadie Hawkins dance, Alice takes the opportunity to explore Levy Castle—the site of one of Castle Cove's most infamous deaths. Mona Moody—­the classic film star—died there almost a century ago, and Alice is pretty sure the police got that invest­igation wrong, too. But before she can even think about digging deeper, she walks right into the scene of a new crime. Rebecca Kennedy, on the ground in a pool of blood. And standing over Kennedy? Another one of Alice's ex-friends—Helen Park.

The Castle Cove Police Department thinks it's an open-and-shut case, but Alice and Iris are sure it can't be that simple. Park isn't a murderer—and the girls know all too well that in life, and in mysteries, things are rarely what they appear to be. To understand the present, sometimes you need to look to the past.

Castle Cove is full of secrets, and Alice and Iris are about to uncover one of its biggest—and most dangerous—secrets of all.
Kathleen Glasgow is the New York Times bestselling author of Girl in Pieces, How to Make Friends with the Dark, and You'd Be Home Now, as well as The Agathas, cowritten with Liz Lawson. She lives and writes in Tucson, Arizona.


Liz Lawson is the New York Times bestselling author of The Agathas (with Kathleen Glasgow) and The Lucky Ones. Liz lives with her family and two VERY bratty cats. You can find her on TikTok, Instagram, and Twitter at @lzlwsn.