How to Raise an Elephant: No. 1 Ladies' Detective Agency (21) (Paperback) 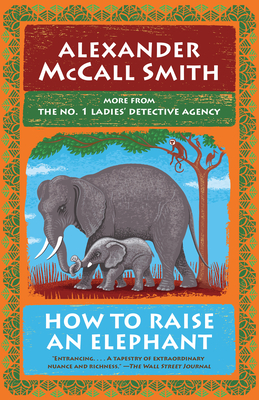 How to Raise an Elephant: No. 1 Ladies' Detective Agency (21) (Paperback)


On Our Shelves Now
In this latest installment in the cherished No. 1 Ladies’ Detective Agency series, Mma Ramotswe must balance family obligations with the growing needs of one of Charlie’s pet projects.

Precious Ramotswe loves her dependable old van. Yes, it sometimes takes a bit longer to get going now, and it has developed some quirks over the years, but it has always gotten the job done. This time, though, the world—and Charlie—may be asking too much of it, for when he borrows the beloved vehicle, he returns it damaged. And, to make matters worse, the interior seems to have acquired an earthy smell that even Precious can’t identify.

But the olfactory issue is not the only mystery that needs solving. Mma Ramotswe is confronted by a distant relative, Blessing, who asks for help with an ailing cousin. The help requested is of a distinctly pecuniary nature, which makes both Mr. J.L.B. Matekoni and Mma Makutsi suspicious. And there is no peace at home, either, as the new neighbors are airing their marital grievances rather loudly. Still, Mma Ramotswe is confident that the solutions to all of these difficulties are there to be discovered—as long as she is led by kindness, grace, and logic and can rely on the counsel of her friends and loved ones.
ALEXANDER McCALL SMITH is the author of the No. 1 Ladies' Detective Agency novels and of a number of other series and stand-alone books. His works have been translated into more than forty languages and have been best sellers throughout the world. He lives in Scotland.

"In a time of pandemic, there could be few more rewarding and soothing tales to read than How to Raise an Elephant."
—New York Journal of Books

"Series fans will be charmed, as usual, by the conversations between Mwa Ramotse and her friends on such topics as the usefulness of men and the benefits of bush tea."
—Publishers Weekly

“Picking up any Alexander McCall Smith novel during these troubling times offers a respite from the surrounding chaos. His philosophical perspective on how we mere humans interact with one another is at once amusing, informative and insightful without being preachy. Smith holds a deep and abiding love for Africa, which we sense in every word he produces.”
—Book Reporter