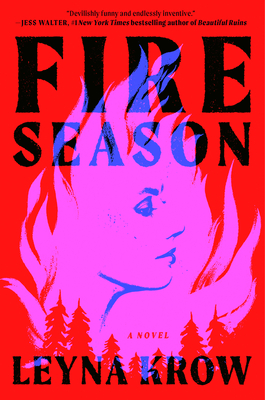 The purchase of this book includes 1 ticket to the Leyna Krow event on July 12th! Check out more information for that event at our events page.

LONGLISTED FOR THE CENTER FOR FICTION FIRST NOVEL PRIZE

"This story is darkly funny, deliciously devious and hugely inventive, a magical twist on the allure of the American West and who goes there to seek their fortune." —Good Housekeeping, "The 30 Best and Most Anticipated Books of 2022 (So Far)"

The propulsive story of three scheming opportunists—a banker, a conman, and a woman with an extraordinary gift—whose lives collide in the wake of a devastating fire in the American West

For the citizens of Spokane Falls, the fire of 1889 that destroyed their frontier boomtown was no disaster; it was an opportunity. Barton Heydale, manager of the only bank in Spokane Falls, is on the verge of ending his short, unpopular life. But when his city goes up in flames, he sees an ember of hope shimmering on the horizon, headed right for him. As citizens flock to the bank to cash out insurance policies and take out loans, he realizes he can command the power he craves—and it’s not by following the rules. Here is his reason to live.

When Quake Auchenbaucher, a career con man hired to investigate the cause of the fire, arrives in Spokane Falls, he employs his usual shady tactics. But this time, with Washington Territory vying for statehood, the sudden attention to due process jeopardizes Quake’s methods of manipulation.

And then there’s Roslyn Beck, whose uncanny ability to see the future has long driven her to drink, and with whom both Barton and Quake have fallen madly and dangerously in love. She is known as a “certain kind of woman,” in possession of unique talents and influence, if only she can find the right ways to wield them. As their paths collide, diverge, and collide again, Barton, Quake, and Roslyn come to terms with their own needs for power, greed, and control, leading one to total ruin, one to heartbreak, and one, ultimately, to redemption.

With masterful precision, devious originality, and dark whimsy, Fire Season freshly imagines the greed and misogyny of the American West to tell a rollicking, bewitching story about finding purpose in the face of injustice.
Leyna Krow is the author of the short story collection I’m Fine, But You Appear to Be Sinking, which was a Believer Book Award finalist. She lives in Spokane, Washington, with her husband and two children.

“Leyna Krow locates her first novel in a late-19th-century American boomtown that ‘prided itself on being wild and rugged.’ Washington Territory is on the brink of statehood when Spokane Falls succumbs to the disaster that gives Fire Season its title. But rising from the ashes is a process that reveals its citizens to be rather more vulnerable than they’d like to believe. So too are the grifters who will soon find themselves at loggerheads—and over much more than easy money.”
—The New York Times Book Review

“This feminist, magical Wild West romp is exactly the summer treat we all ordered.”
—Good Housekeeping

“From the outset, [Fire Season] presses against our understandings of the world [Krow] is rendering, our impulses to categorize it. Is this some species of historical realism or pure fabulism? She constructs the past to leave ample space for doubt. Fiction is, of course, uniquely positioned to reorient a masculine history committed to sidelining the lives of women, and this is precisely the subversive magic Krow is up to here. . . . Krow’s novel offers a welcome feminist reorientation of the regional literature. . . . Krow manages to write a novel that is both apocalyptic and optimistic.”
—Jonathan Frey, The Millions

“Fire Season is uncomfortable and excellent—a story of scams set in the Wild West (Washington not-yet-state in the 1800s). Krow's plot takes off like a spooked horse, running and not stopping, to the delight of the reader. We follow a crooked banker, repulsive and yet so convinced of his righteousness that he's compelling. We follow the prostitute he tries to control, whose personal awakening is so thrilling I wouldn't dare spoil it. And we follow an out-and-out con man who sees the chaos of the territories as an opportunity for constant reinvention. Let this Western take you for a ride.”
—Glamour

“Calling all western fans: this debut novel follows three misfits in [the] 1889 American West [whose] lives end up on the same path after a fire destroys the city of Spokane Falls.”
—Apartment Therapy

“In this enthralling debut, Leyna Krow brings us the story of three misfits, united by fire, each living out a dream (or nightmare) of the American West. It’s an arresting take on magic, science, disaster, and salvation that’s eerily resonant with the fire seasons we find ourselves living through today.”
—Anna North, author of Reese’s Book Club Pick and New York Times bestseller Outlawed

“Evocative . . . . The prose is marvelous. . . . Readers will be captivated.”
—Publishers Weekly (starred review)

“A picaresque story of three schemers whose paths cross in 19th-century Spokane just as the Washington Territory is striving for statehood. . . . [A] darkly whimsical reimagining of the American West.”
—BookPage (starred review)

“Fire Season is a smoldering visitation of the American West, a novel about three opportunistic figures who converge following the great fire of 1889 in Spokane Falls: a conman, a bank manager, and a woman who can see the figure. Sparks fly as they collide with one another, and it’s not long before their simmering tensions, attractions, and conflicts lead to a conflagration most might not see coming, and from the ashes of which most will never rise up again.”
—Olivia Rutigliano, Lit Hub’s “35 Novels You Need to Read This Summer”

"A suicidal banker sees opportunity in an illegal scheme. A new-to-town con man’s time may finally be running out. A future-seeing woman entertains both these men with her power. In her debut novel, Krow (I’m Fine, But You Appear to Be Sinking) follows these three people as their lives converge and are irreparably changed when a fire devastates their town."
—The Millions, "Most Anticipated"

“A magic-laced tale set during Spokane’s founding days. . . . An engaging page-turner reimagining the past with a touch of the supernatural.”
—Chey Scott, The Inlander

“First-time novelist Krow is a keen observer and raconteur of human nature; her characters spring forth fully formed from a few whimsical sentences. The prevailing tone is one of delicious dark humor, along with a touch of the absurd and a dose of spiritualism. The result is a literary conflagration that absorbs down to its cooling embers.”
—Booklist

“Fire Season sparks to life on the power of Leyna Krow's masterful subversion of criminality. While at first this novel's inferno seems confined to one minor western outpost, by the final pages, it's throwing light on the unreliable narrators who perpetuate misogyny across America. Riveting, resonant and charmingly rebellious, Fire Season will leave you wanting to read anything by Leyna Krow.”
—John Larison, author of Whiskey When We’re Dry

“Leyna Krow is a master of literary sleight of hand. Fire Season will convince you it’s a satire of the early American West, while subtly inching into different territory. It’s a completely new kind of story: a genre-bender that teases out strange, wry, beautiful surprises from familiar tropes. Imagine Jane Campion taking over a Coen Brothers film for the denouement. As in her short stories, Leyna Krow is the usher sneaking you in the side door of a future cult classic.”
—Alexis M. Smith, author of Marrow Island

“Fire Season is fantastic. Here’s an old Northwest so full of conmen and creeps, the best thing for it is to burn it all down. Here’s a heroine only Leyna Krow could imagine—a woman whose transformation over the course of this story will also transform what we think a novel of the West can be. A powerful, absorbing, and incredibly funny book.”
—Kate Lebo, author of The Book of Difficult Fruit

“Leyna Krow’s Fire Season is a twisty, beguiling tale that was the most fun I’ve had in a while. If you love the novels of Patrick deWitt; rooting for an imperfect, sometimes devilish character; ‘certain kinds of women’; wildness; and the way wildness tricks us into believing it’s tamed, then get ready. This book is quite the ride.”
—Lindsay Hunter, author of Eat Only When You’re Hungry

“Leyna Krow’s Fire Season is an act of literary magic: A lively historical picaresque about an intertwined trio of schemers, threaded through with a compelling story of a woman forging her own otherworldly redemption out of the crude material of the 19th century American frontier.”
—Shawn Vestal, author of Daredevils & Godforsaken Idaho

“Fire Season conjures up a dazzling vision of the frontier west, where cunning men can take on new identities as easily as riding into a new town and fortunes can be made or stolen in a single scheme. But what's even more thrilling is the way that Leyna Krow quietly complicates that mirage, and digs down towards deeper questions about who such a land of opportunity is really for—and how power, money, gender, and desire shape our lives even in the most lawless places. This is a rich, complex and riveting book whose magic will start working on you long before you've realized its full power, and will stay with you long after you've finished the final page.”
—Kea Wilson, author of We Eat Our Own

“In this rare and luminous novel, Krow weaves a fabulist history of the inland northwest in its rangy adolescence. Against a backdrop of catastrophe, her renegade characters stake everything on games of chance and destiny. Fire Season is a testimony to the power of transformation and influence, a reminder that true vision is not about controlling the future, but creating it.”
—Megan Kruse, author of Call Me Home

“The prose is incantatory. . . . A novel that makes peace with uncertainty.”
—Kirkus Reviews

“Leyna Krow plays fast and loose with the tropes of the frontier novel, leaning in to the notion of the unsettled West as a place where people could reinvent themselves.”
—BookPage, "The Best Historical Novels of Summer 2022"