The Game: A novel of suspense featuring Mary Russell and Sherlock Holmes (Paperback) 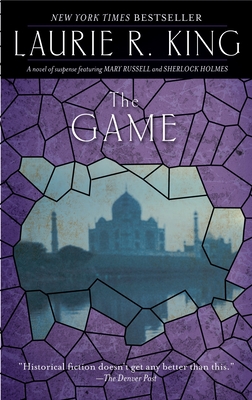 The Game: A novel of suspense featuring Mary Russell and Sherlock Holmes (Paperback)

This is book number 7 in the Mary Russell and Sherlock Holmes series.

It’s only the second day of 1924, but Mary Russell and her husband, Sherlock Holmes, find themselves embroiled in intrigue. It starts with a New Year’s visit from Holmes’s brother Mycroft, who comes bearing a strange package containing the papers of an English spy named Kimball O’Hara—the same Kimball known to the world through Kipling’s famed Kim. Inexplicably, O’Hara withdrew from the “Great Game” of espionage and now he has just as inexplicably disappeared.

When Russell discovers Holmes’s own secret friendship with the spy, she knows the die is cast: she will accompany her husband to India to search for the missing operative. But Russell soon learns that in this faraway and exotic land, it’s often impossible to tell friend from foe—and that some games aren’t played for fun but for the highest stakes of all…life and death.

"May well be the best King has devised yet…. The sights, smells and ideas of India make interesting, evocative reading."—Publishers Weekly, starred review

"A rousing  adventure story made credible by the sheer force of its characters'  personalities and the sharply realized details of their  surroundings. Good historical fiction is as close as we'll ever get  to time travel, and historical fiction doesn't get any better than  this."—The Denver Post

"A wondrously taut mystery, ticking away like a malevolent clock."—Booklist (starred review)