You and Me and Him (Paperback) 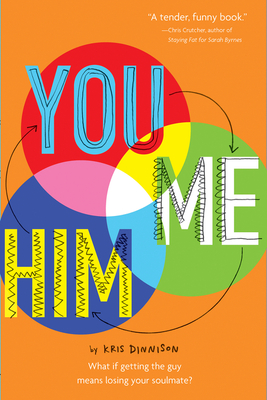 You and Me and Him (Paperback)

“Do not ignore a call from me when you know I am feeling neurotic about a boy. That is Best Friend 101.” —Nash
Maggie and Nash are outsiders. She’s overweight. He’s out of the closet. The best of friends, they have seen each other through thick and thin, but when Tom moves to town at the start of the school year, they have something unexpected in common: feelings for the same guy. This warm, witty novel—with a clear, true voice and a clever soundtrack of musical references—sings a song of love and forgiveness.

Kris Dinnison learned to read when she was five years old. She grew up reading books nobody else had read and listening to music nobody else had heard of and thinking she was weird, which she kind of was. She spent nearly two decades as a teacher and librarian working with students from kindergarten to graduate school. The bulk of that time she spent teaching High School English while dreaming of becoming a writer. Now she lives and writes in Spokane, Washington. Visit her website at www.krisdinnison.net.

"The characters here are effectively nuanced, flawed but forgivable as they muddle through teenage conundrums of loyalty and love." —Bulletin   "All of the protagonists . . .are pushed to ask themselves what expectations other people have of them and whether or not they have accepted these as their own. In the end, Maggie and the others become fully realized characters whose actions cannot be predicted by a YA lit algorithm." —School Library Journal   "A powerful tale with an emotional rawness that will resonate with readers." —Booklist   "Dinnison adeptly portrays the rising and falling hopes within an unconventional love triangle. . . . Readers will follow [Maggie] eagerly as she finds her voice and identity." —Publishers Weekly   "Fans of realistic fiction featuring friendship, loyalty, and trust will enjoy this book."—VOYA   "Firmly at the center stands a protagonist whose likable voice and authentic struggle to accept herself and find love in a world that would rather she shrink back—not to mention her crackling chemistry with Tom—lend this fresh, contemporary romantic comedy considerable appeal." —Horn Book Magazine     —