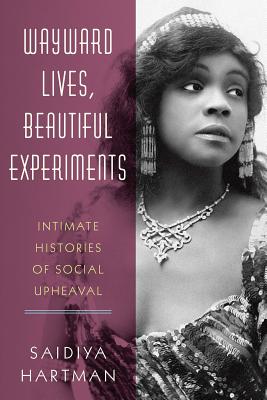 A breathtaking exploration of the lives of young black women in the early twentieth century.

In Wayward Lives, Beautiful Experiments, Saidiya Hartman examines the revolution of black intimate life that unfolded in Philadelphia and New York at the beginning of the twentieth century. Free love, common-law and transient marriages, serial partners, cohabitation outside of wedlock, queer relations, and single motherhood were among the sweeping changes that altered the character of everyday life and challenged traditional Victorian beliefs about courtship, love, and marriage. Hartman narrates the story of this radical social transformation against the grain of the prevailing century-old argument about the crisis of the black family.

In wrestling with the question of what a free life is, many young black women created forms of intimacy and kinship that were indifferent to the dictates of respectability and outside the bounds of law. They cleaved to and cast off lovers, exchanged sex to subsist, and revised the meaning of marriage. Longing and desire fueled their experiments in how to live. They refused to labor like slaves or to accept degrading conditions of work.

Beautifully written and deeply researched, Wayward Lives recreates the experience of young urban black women who desired an existence qualitatively different than the one that had been scripted for them—domestic service, second-class citizenship, and respectable poverty—and whose intimate revolution was apprehended as crime and pathology. For the first time, young black women are credited with shaping a cultural movement that transformed the urban landscape. Through a melding of history and literary imagination, Wayward Lives recovers their radical aspirations and insurgent desires.

Saidiya Hartman is the author of Wayward Lives, Beautiful Experiments and Lose Your Mother. She has been a MacArthur Fellow, Guggenheim Fellow, Cullman Fellow, and Fulbright Scholar. She is a University Professor at Columbia University and lives in New York.

Exhilarating....A rich resurrection of a forgotten history....[Hartman’s] rigor and restraint give her writing its distinctive electricity and tension....This kind of beautiful, immersive narration exists for its own sake but it also counteracts the most common depictions of black urban life from this time.
— Parul Sehgal - New York Times

Revelatory....The book's broad sweep, and its nimble pivoting among a range of scales and perspectives, make room for anonymous loiterers and recalcitrant inmates alongside fleeting stars and the more enduringly famous....Wayward Lives is thrilling to read because it invents a genre as deft and adventurous as the lives it chronicles.

Kaleidoscopic....In granting these forgotten women a voice, and conjuring their longing for freedom, Hartman resists the century-long diminution of their lives to social problems....The result is an effect more usually associated with fiction than history, of inspiring a powerful imaginative empathy—not only towards characters in the distant past but towards the strangers all around us, whose humanity we share.
— Joanna Scutts - New Republic

Genre-bending literary history....These are dishy, illuminating, and heartbreaking stories about the knotted relationship between desire and freedom.
— Kat Stoeffel - Elle

Brilliant....A virtuosic work of scholarship that recovers fragments of the lives of women who were supposed to be forgotten. As a result of her formidable research, stunning erudition, translucent prose and bold imagination, Saidiya Hartman reanimates their lives. Readers will not be able to forget them. They will also learn much about the social forces that enabled and constrained their struggle to live in beauty and freedom.
— Cheryl A. Wall - Times Higher Education

A radical, genre-defying examination of the lives of ‘ordinary’ young Black women....As is redolent of all Hartman’s work, Wayward Lives, Beautiful Experiments offers a blistering critique of historical archives as the singular or even most authoritative source of credible knowledge....[She] implores us to pause and consider who is inside of and outside of the archive; whose voice is heard and whose voice is silenced; whose lives matter and whose lives to not.

A profound and painstaking act of reconstruction that renews our understanding of an era now largely faded from public memory....A bravely wayward, unflinchingly hybrid book, perhaps best described as halfway between the novel and documentary history, but more than anything else it leaves me curious about where Saidiya Hartman’s thinking will take us next.
— Jess Row - Bookforum

Ambitious, original…a beautiful experiment in its own right.
— Maggie Nelson, author of The Argonauts

A startling, dazzling act of resurrection…Hartman has granted these forgotten, ‘wayward’ women a new life…[She] challenges us to see, finally, who they really were: beautiful, complex, and multidimensional—whole people—who dared to live by their own rules, somehow making a way out of no way at all.
— Michelle Alexander, author of The New Jim Crow