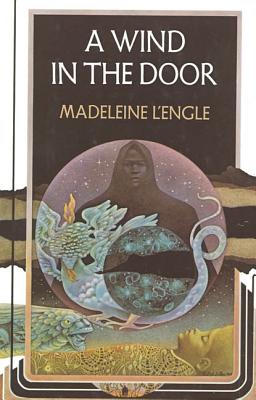 This is book number 2 in the A Wrinkle in Time Quintet series.

It is November. When Meg comes home from school, Charles Wallace tells her he saw dragons in the twin's vegetable garden. That night Meg, Calvin and C.W. go to the vegetable garden to meet the Teacher (Blajeny) who explains that what they are seeing isn't a dragon at all, but a cherubim named Proginoskes. It turns out that C.W. is ill and that Blajeny and Proginoskes are there to make him well – by making him well, they will keep the balance of the universe in check and save it from the evil Echthros.

Meg, Calvin and Mr. Jenkins (grade school principal) must travel inside C.W. to have this battle and save Charles' life as well as the balance of the universe.

Madeleine L'Engle (1918-2007) was the Newbery Medal-winning author of more than 60 books, including the much-loved A Wrinkle in Time. Born in 1918, L'Engle grew up in New York City, Switzerland, South Carolina and Massachusetts. Her father was a reporter and her mother had studied to be a pianist, and their house was always full of musicians and theater people. L'Engle graduated cum laude from Smith College, then returned to New York to work in the theater. While touring with a play, she wrote her first book, The Small Rain, originally published in 1945. She met her future husband, Hugh Franklin, when they both appeared in The Cherry Orchard. Upon becoming Mrs. Franklin, L'Engle gave up the stage in favor of the typewriter. In the years her three children were growing up, she wrote four more novels. Hugh Franklin temporarily retired from the theater, and the family moved to western Connecticut and for ten years ran a general store. Her book Meet the Austins, an American Library Association Notable Children's Book of 1960, was based on this experience. Her science fantasy classic A Wrinkle in Time was awarded the 1963 Newbery Medal. Two companion novels, A Wind in the Door and A Swiftly Tilting Planet (a Newbery Honor book), complete what has come to be known as The Time Trilogy, a series that continues to grow in popularity with a new generation of readers. Her 1980 book A Ring of Endless Light won the Newbery Honor. L'Engle passed away in 2007 in Litchfield, Connecticut.

“The chief characters of A Wrinkle in Time return in a complex sci-fi / fantasy adventure that is both similar and superior . . . The action is precipitated by Charles Wallace's failing health and his difficulties in being accepted by other children now that he's started school. Meg and O'Keefe are enlisted again to fight evil, this time in the shapre of Echthroi ('Light snuffers. Planet darkeners. The dragons. The worms. Those who hate.'), which are spreading through the universe. Guided by their mysterious teacher Blajeny and accompanied by a myriad-eyed, multiwinged cherubim named Proginoskes, Meg, Calivn and Mr. Jenkins (the crusty, unimaginitive school principal with whom Meg ha shad difficulty in the past) must pass three ordeals in order to save Charles Wallace from the Echthroi. Once again it is love that enables Meg to overcome evil, and L'Engle reaches mystical ecstasy in describing Meg's apprehension of the beauty and unity of the universe. Complex concepts of space and time are handled well for youn greaders, and the author creates a suspensful, life-and-death drama that is believably of cosmic significance. Complex and rich in mystical religious insights, this is breathtaking entertainment.” —Starred, School Library Journal