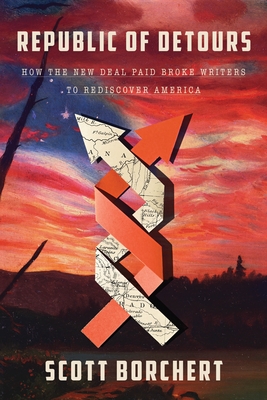 An immersive account of the New Deal project that created state-by-state guidebooks to America, in the midst of the Great Depression—and employed some of the biggest names in American letters

The plan was as idealistic as it was audacious—and utterly unprecedented. Take thousands of hard-up writers and put them to work charting a country on the brink of social and economic collapse, with the aim of producing a series of guidebooks to the then forty-eight states—along with hundreds of other publications dedicated to cities, regions, and towns—while also gathering reams of folklore, narratives of formerly enslaved people, and even recipes, all of varying quality, each revealing distinct sensibilities.

All this was the singular purview of the Federal Writers’ Project, a division of the Works Progress Administration founded in 1935 to employ jobless writers, from once-bestselling novelists and acclaimed poets to the more dubiously qualified. The FWP took up the lofty goal of rediscovering America in words and soon found itself embroiled in the day’s most heated arguments regarding radical politics, racial inclusion, and the purpose of writing—forcing it to reckon with the promises and failures of both the New Deal and the American experiment itself.

Scott Borchert’s Republic of Detours tells the story of this raucous and remarkable undertaking by delving into the experiences of key figures and tracing the FWP from its optimistic early days to its dismemberment by the House Committee on Un-American Activities. We observe notable writers at their day jobs, including Nelson Algren, broke and smarting from the failure of his first novel; Zora Neale Hurston, the most widely published Black woman in the country; and Richard Wright, who arrived in the FWP’s chaotic New York City office on an upward career trajectory courtesy of the WPA. Meanwhile, Ralph Ellison, Studs Terkel, John Cheever, and other future literary stars found encouragement and security on the FWP payroll.

By way of these and other stories, Borchert illuminates an essentially noble enterprise that sought to create a broad and inclusive self-portrait of America at a time when the nation’s very identity and future were thrown into question. As the United States enters a new era of economic distress, political strife, and culture-industry turmoil, this book’s lessons are urgent and strong.

Scott Borchert is a writer and editor based in New Jersey, and a former assistant editor at Farrar, Straus and Giroux. He holds a master’s degree in cultural reporting and criticism from the Arthur L. Carter Journalism Institute at New York University, and his work has appeared in The New York Times, The Atlantic, Air Mail, Southwest Review, Monthly Review, and other publications. Republic of Detours is his first book.

"Borchert’s survey is absorbing from beginning to end and impeccably researched and written; it neglects neither telling details nor big-picture conclusions, and it lets each of its central figures come alive on the page." —Yuval Taylor, The New York Times Book Review

"Republic of Detours shows that when a good writer meets a subject for which he or she has a passion, the result is almost always going to be fine . . . [Borchert is] excellent at character studies . . . [and] a resourceful and indefatigable researcher." —Ben Yagoda, The Wall Street Journal

"[Republic of Detours] is as inviting, compelling, comprehensive, and endearingly quirky as the volumes it celebrates and explains . . . Brilliant." —David M. Shribman, The Boston Globe

"Borchert’s heartening new history of the original Federal Writers’ Project . . . could hardly have arrived at a better time . . . The aspect of the project that seems dearest to Borchert’s heart is the travel guides themselves . . . In their dense accumulation of particulars, their meandering and often eccentric presentation of a regionally and culturally diverse country, Borchert suggests, they offer something of an alternative blueprint for how to tell the American story." —Margaret Talbot, The New Yorker

"With this whimsical, well-researched book, Borchert has done full justice to this forgotten literary achievement and the eccentric, often quarrelsome characters who created it." —Max Boot, The Washington Post

"What [Borchert] pulls off in Republic of Detours is a dynamic and discriminating cultural history that speaks to both readers who know something about the [FWP] and those who don't. Like the American Guides these Depression-era writers worked on, Borchert's book teems with colorful characters, scenic byways and telling anecdotes; his own writing style is full of 'verve'—the much prized quality that so many of the guides themselves possessed . . . Borchert also makes a timely case for viewing these guidebooks [. . .] as presenting a 'multitudinous' national story that was directly at odds with the Euro-centric, 'whites only' one cherished by nativists." —Maureen Corrigan, NPR

"[A] terrific new biography of the [Federal Writers'] Project . . . Borchert has done heroic work in the archives, mining long-neglected letters and dull government reports for the same type of life-giving detail that this school of national literary history, and its thoughtful conceivers, thrived upon." —Tom Zoellner, Los Angeles Review of Books

"Borchert, through a series of biographical chapters on some of the best-known authors, engrossingly shows how the New Deal recognized art as labor and why that model should be reinvigorated today . . . With its reminder that creative labor was once seen as worthy of federal protection similar to a strategic reserve of fuel, weapons, or medical supplies, Republic of Detours mobilizes New Deal history to help us imagine what our society would be like if federal tax dollars supported a reserve army of muralists, poets, and oral historians." —Max Holleran, The New Republic

"Borchert has produced an essential road map for [those seeking to revive the FWP]: “Republic of Detours” is a lively history of the project and its writers, but it offers something even more valuable: a lesson in the organizational challenges and poisonous politics that eventually doomed the FWP not in spite of its best intentions, but because of them." —Mary Ann Gwinn, Los Angeles Times

"Borchert's vast research and appreciation of this stellar group [of writers] shows what government nurturing of artists can accomplish in even the worst of times." —Booklist (starred review)

"A wide-ranging and deeply researched study . . . Borchert’s lucid prose brings the FWP and its colorful personalities to life . . . Literature and history buffs will learn much from this immersive portrait of 1930s America." —Publishers Weekly

"Borchert provides interesting, detailed portraits of FWP life and how office politics and pressure from the left (strikes) and right (redbaiting, threats of defunding) jeopardized the endeavor . . . A well-documented, engaging history of a program that treated writers as valuable citizens." —Kirkus Reviews

“A joy to read, this book blends riveting life narratives of luminous authors put to work by the New Deal’s Federal Writers’ Project with absorbing portraits, both geographic and social, of Depression America. Through an engagement with the history of 48 state guidebooks, we gain a bracing account—ever more germane—of the country’s riven politics and fraught questions of race.” —Ira Katznelson, professor of history and political science at Columbia University and author of Fear Itself: The New Deal and the Origins of Our Time

“A description of Scott Borchert’s Republic of Detours sounds a bit like cover copy you might discover on a remaindered utopian pulp novel: During a period of crisis and widespread suffering, the United States government, acting in the common good, offered jobs to all in need—even artists and writers. But the book you’re holding is a serious work of history, not a daydream captured in prose. It is the story of the Federal Writers’ Project, the desperate and talented writers it employed, and the idiosyncratic books they created. The project existed for only a few years, but in that time it revived dozens of careers, provided early support to some of the most impactful writers of the twentieth century, and shaped our literary tradition by anchoring it to our land, people, and lore, and infusing it with vernacular and doggerel. It’s a story of great consequence, and Borchert has done it justice by writing an account worthy of sharing shelf space with his subjects.” —Colin Asher, author of Never a Lovely So Real: The Life and Work of Nelson Algren

“The intersection of literature and politics is often described as a bloody crossroads. Scott Borchert’s engrossing and wonderfully well researched history of the Federal Writers’ Project suggests another metaphor: a rich, complex, and sometimes stormy marriage. Somehow the government harnessed the talents and energies of thousands of economically strapped writers and editors from, yes, sea to shining sea in a Rube Goldberg-esque bureaucracy and produced books that merged the all-inclusive spirit of Leaves of Grass with the utility of AAA motoring guides. The lessons to be learned in Republic of Detours about how government can (and must) support American culture and the people who produce and administer it are many and timely and very, very urgent.” —Gerald Howard, editor of The Sixties: The Art, Politics, and Media of Our Most Explosive Decade and author of a forthcoming biography of Malcolm Cowley